Government pleads with court to protect state land from invaders 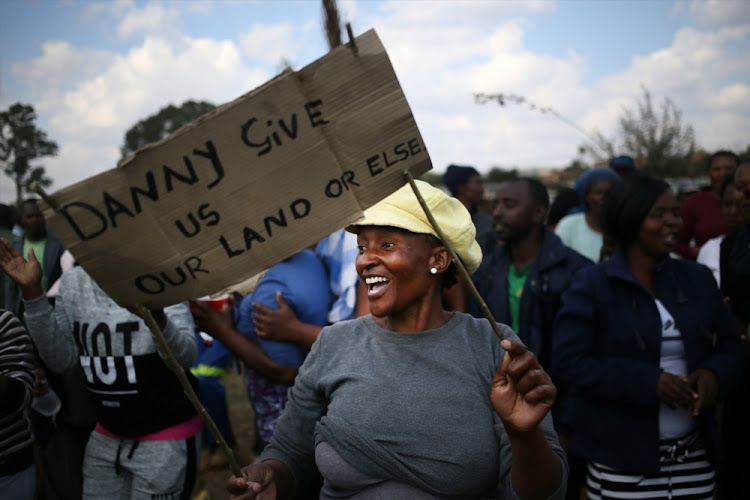 A protest for the occupation of more land in what residents called an illegal land invasion in Lenasia, Johannesburg on April 25, 2016. The land debate has recently again stirred up emotions among both black and white. File photo
Image: Gallo Images / The Times / Alon Skuy

The National Department of Public Works has won a court order to stop land invasions on state property in Vryheid‚ northern KwaZulu-Natal.

Acting on behalf of the State Attorney‚ Advocate Dashendra Naidoo brought an urgent application in the Pietermaritzburg High Court on Friday after a group of people descended on a plot earmarked for low-cost housing.

In his application before court‚ the department's property management senior administrator officer‚ Zakhele Ndebele‚ said he had received information that sites were being pegged and demarcated on the property with the clear intention of constructing dwellings.

"There was no permission given to any individual to occupy‚ peg‚ demarcate or construct any dwellings on the vacant land belonging to the Department of Public Works."

He visited the property with the police on March 20.

Somali shopkeeper Abdala Gedi in a split second had to choose between staying to protect the business that put food on the table for his family‚ or ...
News
3 years ago

"I personally observed the plots on the vacant land have been specifically demarcated and pegged clearly with the intent to construct dwellings on the land. I was able to estimate that provision has been made for the construction of approximately 100 structures‚" he said.

Ndebele said no permanent structures had been constructed and that he had no information on the identities of the illegal invaders.

"Despite enquiries being made in the vicinity to establish the identity of the persons who demarcated the plots on the land‚ no information was forthcoming. It is therefore not possible to identify who is responsible for the demarcating of the plots with a clear intention of constructing structures on the said sites so demarcated‚" he explained in his affidavit.

He believed that construction of illegal houses was delayed by the inclement weather.

"It is however highly likely that as soon as favourable weather conditions prevail‚ construction of dwellings will immediately commence."

Ndebele said if the land invasion was not immediately stopped‚ the housing development would be compromised.

"In the event that this occurs there will be serious financial and other consequences in respect of the housing project."

The court issued an interdict restraining "the occupiers of portion 3 of the Farm Veelsgeluk No 171" from occupying‚ demarcating‚ fencing and erecting structures on the land.

'You have been heard'‚ Hermanus protesters told

“I lost everything. My house was burnt down.”
News
3 years ago

“We are saying enough is enough. There is open land to build affordable houses for us.”
News
3 years ago
Next Article