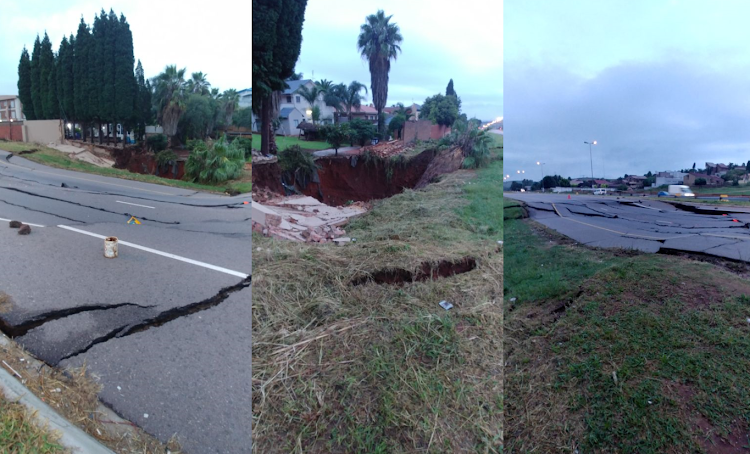 A series of sinkholes have residents in Laudium concerned - and they're growing bigger.
Image: DEPT OF TRANSPORT

The gaping sinkhole on the R55 Quagga Road near Laudium continues to get even bigger‚ Gauteng Roads and Transport said on Tuesday.

Spokesperson Melitah Madiba said the last time the sinkhole was measured‚ it was 30 metres deep and 25 metres wide.

"The technical teams are going to conduct further tests but they need it to mature or collapse completely in order to ensure they don't put anyone at risk‚" Madiba said.

A preliminary report compiled by the technical team estimated that around R50-million would be needed to repair the hole.

"That is just an estimation. They have also estimated that it may take over six months to [to complete the repairs]‚" Madiba said.

Two homes have been affected by the ground collapse.

Madiba said at the moment‚ there were no plans to move the house occupants but the area was being closely monitored.

The families who have lost their walls in the collapse shared their concerns with the officials.

"They are concerned about people stopping to take pictures. It is just not safe for them. They have asked people to stay clear of the area. Metro Police will also be around‚" Madiba said.

A technical team was expected to meet on Sunday afternoon to discuss and come up with a plan to deal with the gaping sinkholes on the R55 Quagga Road ...
News
4 years ago