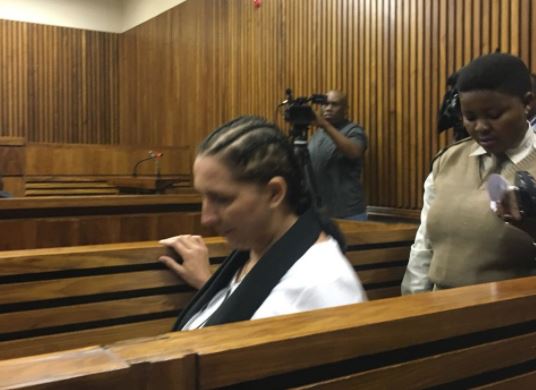 Convicted racist Vicki Momberg has arrived in court after spending the past week in jail - and she's sporting cornrows.

Shocked gasps greeted Momberg's arrival in courtroom 13 at the Randburg Magistrate's Court in Johannesburg‚ where she was last week sentenced to an effective two years in jail for her racist rant against black police officials.

In a video that went viral on social media‚ Momberg was recorded using the k-word 48 times and complaining about the calibre of "k***s" in Johannesburg.

She pleaded not guilty to four charges of crimes injuria - defined as "a wilful injury to someone's dignity‚ caused by the use of obscene or racially offensive language or gestures" - on the basis that she suffered from a form of temporary insanity.

Momberg was convicted on all four charges and sentenced to an effective two years in jail.

She's appealing both her conviction and her sentence. That appeal application was on Wednesday postponed to April 11. Momberg’s attorneys have also requested copies and transcripts of the 10111 calls in which Momberg repeatedly uttered the k-word.

Dan Roodt - who famously got into a skirmish at the Equality Court with Chester Missing over Steve Hofmeyr's failed bid to get a protection order against the puppet - was in the courtroom for Momberg's appearance.

He told journalists he was there “to support another heretic”.

Twitter users are responding to Momberg's new look with both humour and disapproval:

Who did her hair? I’d really love to know and what did they talk about? Every one know hair time is therapy time.

😂😂 yes i think so too. It's actually a sign that she loves her new Res.

😂😂😂😂, that didn't take long. Now she just needs that teardrop tattoo for control.

She should get an extra 2 years for cultural appropriation (without compensation).

A video clip of Trevor Noah explaining the sentencing of convicted racist Vicki Momberg to jail has gone viral.
TshisaLIVE
3 years ago

An audio recording released this week of convicted racist Vicki Momberg’s call to 10111 operators revealed the true extent of her horrific rage.
News
3 years ago

Four lawyers down‚ a damning psychologist report‚ a dismal assessment by a probation officer and a character witness who painted her as a “lunatic” ...
News
3 years ago