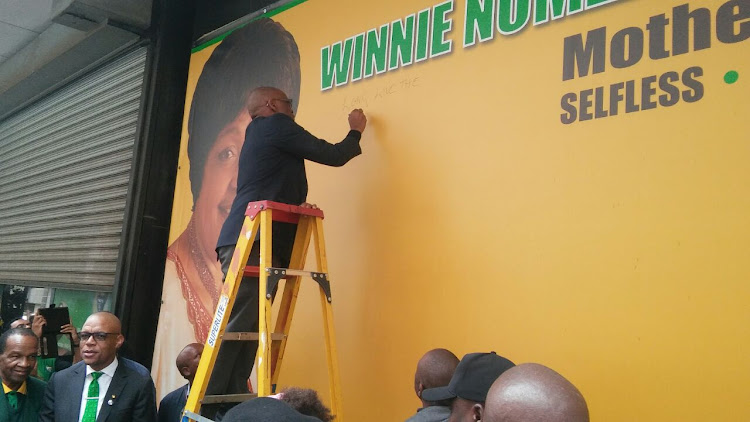 The ANC has officially launched a tribute wall on which the general public will be able to honour the late Winnie Madikizela-Mandela.

The memorial wall was officially unveiled by ANC secretary general Ace Magashule outside Luthuli House in the Johannesburg inner city on Monday morning.

After hardly 20 minutes‚ messages were beginning to eat up the space that has been allocated for the public to remember the woman known as the mother of the nation.

“We are going to continue celebrating the life of Mama Winnie Madikizela-Mandela. We appreciate what South Africans are doing all over the country‚ from all walks of life‚” Magashule said.

“This is uniting South Africans and I am definitely sure what Mandela and Winnie fought for – a non-racial‚ non-sexist‚ united‚ democratic South Africa is what we envisage moving forward. I’m sure we will further consolidate the unity and renewal of the ANC.”

Similar tribute walls will be launched in other provinces.

Madikizela-Mandela died on April 2 after a long illness at the Netcare Milpark Hospital in Johannesburg. She was 81 at the time of her death.

From 1961 on, Winnie Madikizela-Mandela colluded with photographers to broadcast a narrative affirming the story of resilience through subtle ...
Lifestyle
3 years ago

Exile in dust: Madikizela-Mandela left her mark on Brandfort

The nine years that Winnie Madikizela-Mandela spent under banning orders in Brandfort were marked by turmoil, frustration, fear, anguish and some ...
News
3 years ago

Married to Mandela: 'Life with him was life without him'

'It's a lie that Winnie killed Stompie,' says Vytjie Mentor

Former ANC MP Vytjie Mentor says it's a fallacy that Madikizela-Mandela had a role in Stompie Seipei's murder.
Politics
3 years ago