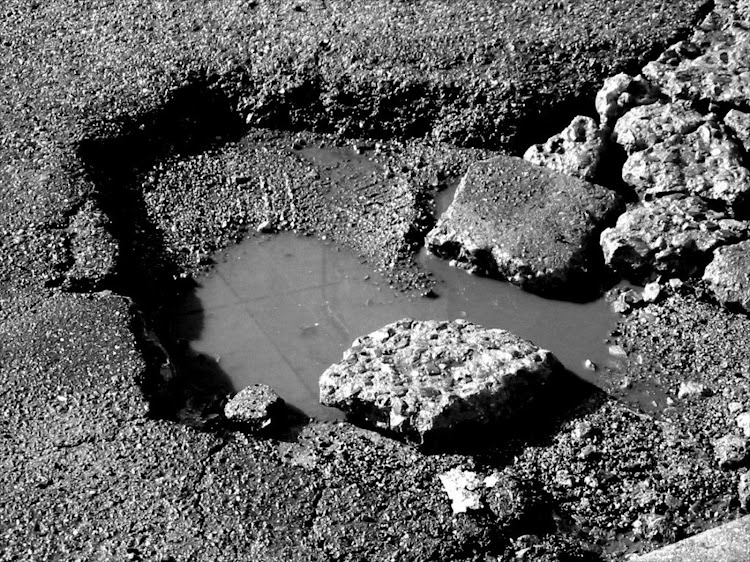 Some roads in Mpumalanga are nothing more than potholes with tar‚ according to a local businessman.

Oupa Pilane‚ president of the Kruger Lowveld Chamber of Business and Tourism‚ said badly damaged roads were harming tourism‚ the economy and jobs in the province.

“We are trying to get fresh money in to try and build the province‚ because you need that money. We keep building malls and everything‚ but for those shopping complexes and everything to be sustainable‚ you need new money.”

Pilane said the provincial government bungling the maintenance of viewing areas was another problem.

“They are in a terrible state. Two things that top the concerns of most of the tour operators wherever you go are the public roads and public toilets. There are no public toilets and where there are public toilets‚ you cannot use that toilet.”

The chamber said the provincial government should fix the roads to attract tourists to Mpumalanga. Pilane singled out the Panorama Route‚ which he called Mpumalanga’s “jewel”.

“It is a low-hanging fruit that can be maximised to create new and inclusive enterprises that will see more of our previously disadvantaged people taking an active role in the tourism industry.”

The Panorama Route runs between the Blyde River Canyon and the little town of Sabie. Bourke’s Luck‚ God’s Window and waterfalls such as Lone Creek‚ Mac-Mac and Bridal Veil are along the route.

According to Pilane‚ they first spoke to the provincial government three years ago.

“Minor sub-standard interventions were attended to‚ but due to the poor quality of work‚ the roads have become even more dangerous than they were before. We continue to receive negative feedback from visitors – both domestic and international – about the condition of our roads.”

“You can’t even see them. Some of the potholes from Graskop are being fixed‚ but my worry is that I saw shovels and wheelbarrows used as if they are digging a toilet pit. Then you ask yourself that as the contractor fixing that road using such [materials]‚ is he even going to use proper material or three months later [are] we going [to] be back to square one?”

Another motorist said driving from Hazyview to Sabie was a “very bad experience”.

“Looking at all those accommodation places along that route really‚ that road isn’t a good way of selling the province to our fellow guests from abroad and other provinces.”

We don't drive on Mpumalanga roads, we dodge potholes.

Dear Mr President @CyrilRamaphosa The roads at Mpumalanga need a serious fixing, especially R36. More than 10 cars hit potholes on Thursday😢. We are not safe on the roads.

I'm astounded by how our think! Making dd mabuza a deputy president: look at mpumalanga's roads, look at witbank,total squalor,the roads!! Compare this to Nelspruit. Now you talking land! Land my foot!!

TimesLIVE has approached the Mpumalanga provincial government for comment.