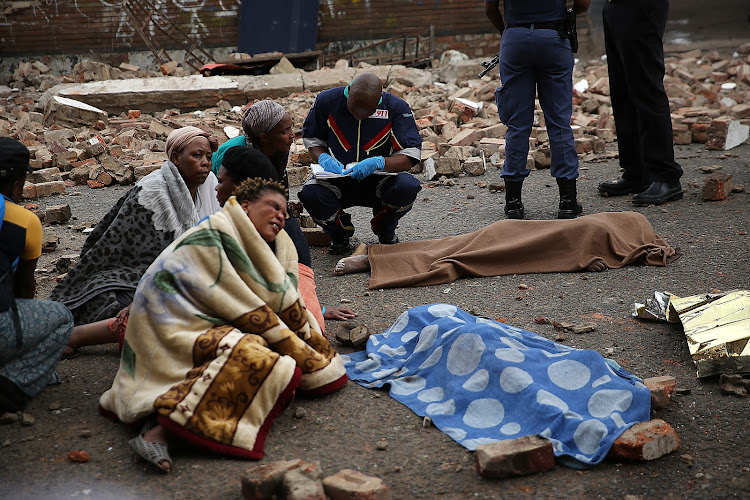 Relatives mourn the loss of young children, after a wall collapsed onto them while they were playing, in Doornfontein, Johannesburg.
Image: ALON SKUY

The families living in an abandoned building in Davies Street in Doornfontein where a wall collapsed on Monday killing three children‚ had been asking the City of Johannesburg for emergency accommodation for eight months. But none was provided.

It said the residents had been aware that the building was unsafe for some time.

“Since mid-2017‚ SERI has been pressing the City of Johannesburg to provide the residents with emergency accommodation‚ which would have allowed them to move out of the dangerous building to safer accommodation elsewhere.

IN PICTURES | Deadly wall collapse: 'It sounded like a big car crash'

Shimmering foil covered the bodies of three children who were crushed by a wall in Davis Street in Doornfontein‚ on Monday morning.
News
4 years ago

It said the residents were just 300 of an estimated 100‚000 people living in abandoned properties in the inner-city of Johannesburg‚ many in unsafe conditions.

“The occupiers of these properties are forced to live in abandoned buildings because they cannot afford to rent or buy housing on the private market‚ and the City has failed to provide affordable rental housing or shelter accommodation for them‚” it said.

SERI said the city had a constitutional duty to provide the residents of 39 to 41 Davies Street‚ and people like them‚ with affordable‚ safe alternative accommodation‚ but had consistently failed to do so.

“The City’s plans are to provide a mere 364 new beds in temporary accommodation this year. That is a tiny fraction of what is required to cater for poor people living in Johannesburg’s abandoned buildings.”

Nomzamo Zondo‚ SERI’s director of litigation‚ said: “The City must do better. It is not acceptable that there is literally no accommodation available for people‚ such as the residents‚ who are living in profoundly unsafe conditions.

At least three children playing in a rundown section of Johannesburg's inner city suburb of Doornfontein died on Monday‚ after a wall collapsed.
News
4 years ago