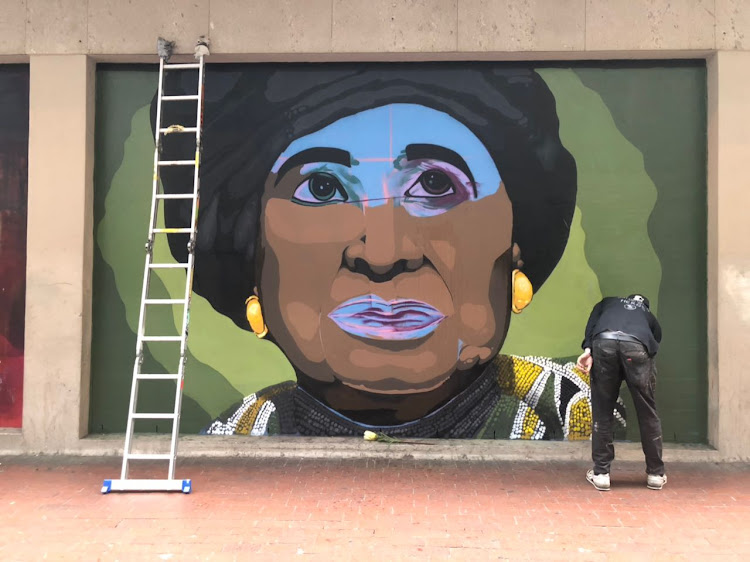 A graffiti artwork in memory of the late Winnie Madikizela-Mandela was unveiled on the side of a building in Cape Town on Monday.

ANC spokesperson Lionel Adendorf said the Western Cape served as a special place for the ex-wife of Nelson Mandela who used to frequent the province while he was imprisoned.

“Winnie… was a frequent visitor here. The Western Cape was a special place to her and therefore we do think that it is fitting that the Western Cape has a wall where our members and supporters can come to and think of her… to commemorate her life‚” said Adendorf.

“Cape Town is not like Brandfort where the house is where Mam’ Winnie was banished to. Or like Bizana where her childhood home is. Or even like Soweto where she stayed. The mural is special to us because it gives many people a place where they can come and put their flowers‚ light their candles and take pictures. We commissioned a graffiti artist to do it because we wanted it to be bolder‚ stronger and different from the two pieces of Mandela and Tutu that were there already and the latter is also the reason why we chose the wall.”

Nelson Mandela's widow‚ Graca Machel‚ paid an emotional tribute to her “big sister”‚ the late Winnie-Madikizela-Mandela‚ on Monday at Constitutional ...
Politics
3 years ago

Police have confiscated firearms carried by three people after gunshots were fired near to the home of the late Winnie Madikizela-Mandela.
News
3 years ago

The image is nestled between portraits of Nelson Mandela and Desmond Tutu on a building in the CBD.

However‚ as poignant as the image is‚ the owners of the building were initially surprised. “Our portraits of Madiba and Archbishop Tutu‚ and many more inside the building‚ reflect our commitment to arts and culture and respect for great African and world leaders‚” said Frank Gormley‚ speaking on behalf of the building’s owners.

“The portrait of Mama Winnie was not commissioned by us and we are very disappointed those involved did not consult with us. However‚ recognising the huge role she played in leading the struggle against apartheid‚ we welcome her memory to 106. When the period of mourning is over‚ we will reconsider how we can best honour her‚ our youth and all the other great people who helped lay the foundation for this great nation‚ South Africa.”

Adendorf said the location of the artwork made perfect sense. “The wall is adjacent to the same building where our provincial office is and we are lucky enough to have the two portraits of Nelson Mandela and Desmond Tutu.”

Graffiti artist Garth Wareley was pleasantly surprised to find a flower at the foot of the mural early on Monday.

“The feedback has been rather positive thus far. I even found a flower this morning - a protea which is really cool as a tribute to Ma Winnie. The remarks of people have been pretty positive‚” he said.

“There was one guy who came up to me and ask me why I am painting a terrorist… and asking me why I didn’t paint Bin Laden. I don’t know‚ it is a strange country we live in.”

The ANC has officially launched a tribute wall on which the general public will be able to honour the late Winnie Madikizela-Mandela.
News
3 years ago

'I did a military salute' - Jeff Radebe at Winnie's deathbed