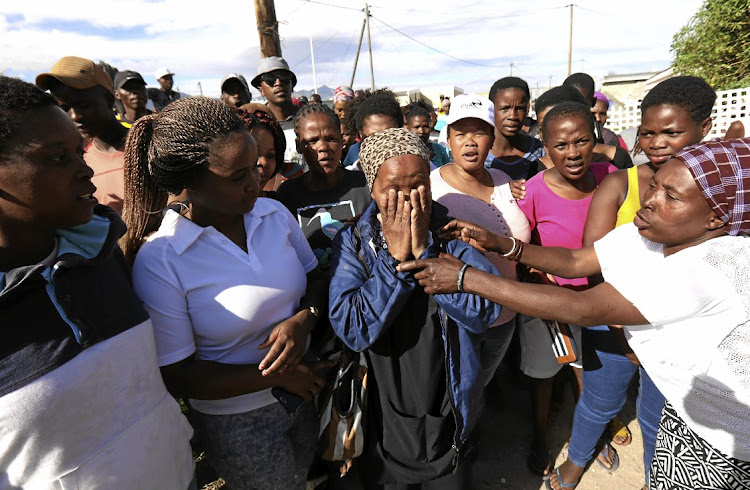 Nomaza Nomandela, centre, was part of a group of protesters who invaded land in Hermanus. She also received an SMS demanding she pay rates.
Image: Esa Alexander

Protesters marched to the Magistrate’s Court in Hermanus on Tuesday‚ calling for the release of people arrested during a thwarted land grab in the coastal town.

Vehicles‚ a satellite police station and part of a library were torched when protesters clashed with police and a security company after plots of land were marked out last month. Scores of people were arrested. Looters stole stock from foreign-owned shops and foreign families were forced to flee for their lives.

Gcobani Ndzongana‚ an activist and administrator of the Facebook page Zwelihle Renewal‚ said in a post on Monday evening that residents of the township would march to the court to "demand the release of those who are arrested". He added: "It's all shut down no work for your safety."

Some of the arrested residents are appearing in court on Tuesday.

Ockie tweeted a picture of the marchers‚ escorted by police‚ early on Tuesday.

Masses in Hermanus marching towards court. They demand the release of those arrested in the recent riots. pic.twitter.com/w1xuVunqoT

Hermanus online tweeted images of the marchers outside court.

Early this morning in Hermanus, 8h45
The main group of marchers outside the court. It is peaceful at present.
R43 partially blocked by the marchers. pic.twitter.com/DKlDnNOsbl

Residents of Zwelihle said they were fed up with living in backyards and complained of being forced to wait years in the hope of one day getting a home of their own.

TimesLIVE spoke to Nomaza Nomandela‚ 52‚ one of the backyarders involved in the attempted land grab earlier‚ who said she had been on a local housing list for 12 years.

"I received a letter that indicated that my house was ready in May 2016‚" she said.

"I took all the necessary documents to the local municipal office‚ but when I got there officials told me that I do not qualify for a house because I earned more than R3‚500.”

Nomandela‚ who works as a cleaner‚ shares the backyard‚ which has one toilet‚ with four other families. Her rent was recently hiked from R200 to R600 because she has a big family.

Somali shopkeeper Abdala Gedi in a split second had to choose between staying to protect the business that put food on the table for his family‚ or ...
News
3 years ago

The protests also saw foreign-owned businesses being looted and forced many people to flee from Zwelihle. Somali shopkeeper Abdala Gedi‚ 20‚ was forced to abandon his shop during the chaos last month.

"We as government made the mistake that people living in the informal settlements are the only ones that need our help. The backyarders also need our help. We need to get the money from national government to make sure this process runs as speedily as possible‚" he said.

The ANC has rubbished DA claims that a member of the Western Cape legislature incited violence in Hermanus this week.
Politics
3 years ago

'You have been heard'‚ Hermanus protesters told

Western Cape human settlements MEC Bonginkosi Madikizela on Tuesday told angry residents demanding homes in Hermanus that their grievances had been ...
News
3 years ago
Next Article