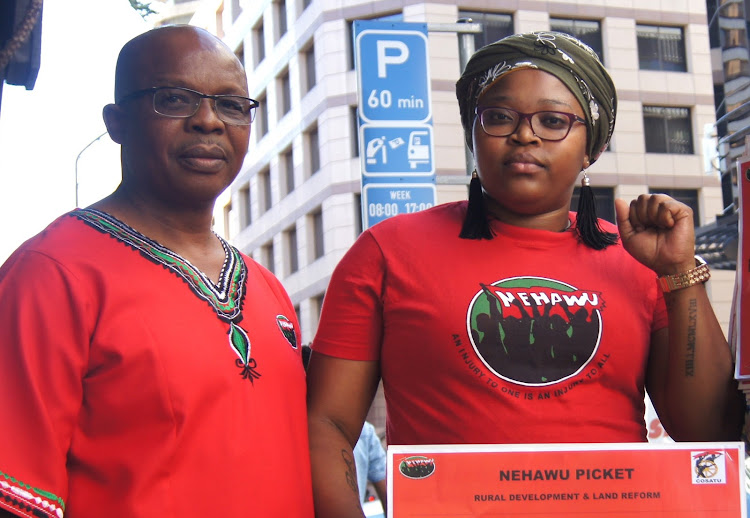 Allegations of unfair labour practice sparked a picket on Wednesday by Cape Town employees of the Department of Rural Development and Land Reform.

A group of National Education Health and Allied Workers Union members in red Nehawu shirts and carrying posters stood outside the department’s Long Street offices for the third consecutive day.

Among their complaints‚ they alleged unfair dismissal of employees‚ disadvantage for rural workers and corruption by management.

“We lodge grievances that are never followed up by the labour relations‚” said protester Siyanda Ngudle. “We’ve been crying out loud for four years.”

The picketers said staff were being demoralised by their managers and felt they were not respected. The group had drawn up a memorandum of grievances but no one from the department was available to receive it.

We’ve been crying out loud for four years.

The deputy director of communications for the department‚ Vuyani Nkasayi‚ confirmed that no document had been received from the union.

“We are aware of the grievances and will respond once we study the memorandum‚” he said.

The South African Federation of Trade Unions (Saftu) and its affiliated unions in the Western Cape plan to march in Cape Town on Thursday.
News
3 years ago

The embattled Durban University of Technology (DUT) has secured a court interdict to stop a group of students - including controversial “Fees Must ...
News
3 years ago

Durban police had to contend with a furious crowd who torched boats in protest after a five-year-old girl was killed on Sunday.
News
3 years ago