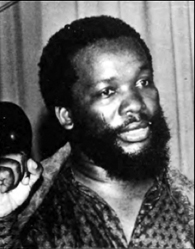 The late ANC veteran Inkosi Mhlabunzima Maphumulo will be awarded with the Order of Luthuli in Gold for his exceptional contribution to conflict resolution and resistance against injustice and oppression.

President Cyril Ramaphosa sent a letter to his family on Friday.

“The president has therefore decided to honour him with the Order of Luthuli in Gold for his exceptional contribution to conflict resolution and to resistance against injustice and oppression. He lost his life fighting for his people‚” read the letter.

The awards ceremony will be held at the Sefako Makgatho presidential guest house on April 28.

Maphumulo‚ who earned a reputation as a “maverick”‚ “rebel chief” and “peace chief” for his resistance to the IFP domination in KwaZulu-Natal and his struggle to quell state-sponsored violence in the province during the last years of apartheid‚ was assassinated in 1991.

A man claimed to have been assigned by the apartheid government’s intelligence services to kill Maphumulo‚ but nothing came of the investigations.

The popular chief from the Midlands was among the very first traditional leaders in KwaZulu-Natal to throw his lot in with the United Democratic Front.

He was once assaulted outside the old KwaZulu Legislative Assembly in the 1980s for speaking out against undemocratic practices within the IFP from which he later defected to the ANC.

He was the first president of the National Conference of the Congress of Traditional Leaders (Contralesa). In 2011 a R7-million iNkosi Mhlabunzima Maphumulo one-stop development centre in the rural town of Maqongo‚ just outside Pietermaritzburg‚ was named after him.

The centre comprises a crèche‚ postal services‚ a home affairs office and a social development office where people can apply and access social grants and pensions.

As first president of Contralesa‚ he recruited amakhosi into the anti-apartheid movement and to assure a place for traditional authority in a democratic South Africa.

In 1989 Maphumulo led a Contralesa delegation to Lusaka in Zambia — a meeting which resulted in a joint memorandum which recognised the role of traditional leadership in resisting apartheid.

After the meeting an Umkhonto WeSizwe bodyguard was assigned to protect him after he had received numerous death threats.