HeraldLIVE photographer, Werner Hills captured the moment a father threw his baby off the roof of his shack in Joe Slovo informal settlement in Nelson Mandela Bay.

A metro police constable has been hailed as a hero after he skillfully caught a baby who was flung off the roof of a shack during a stand-off with police.

Nelson Mandela Bay Municipality paid tribute to constable Luyolo Nojulumba at a press conference‚ describing him as “our hero” on Friday.

The constable watched a tense drama unfold as a 38-year-old father climbed on the roof of his shack in Joe Slovo township‚ threatening to throw his daughter to the ground if authorities demolished the structure on Thursday. As police tried to negotiate with him‚ he hurled the infant towards the ground. 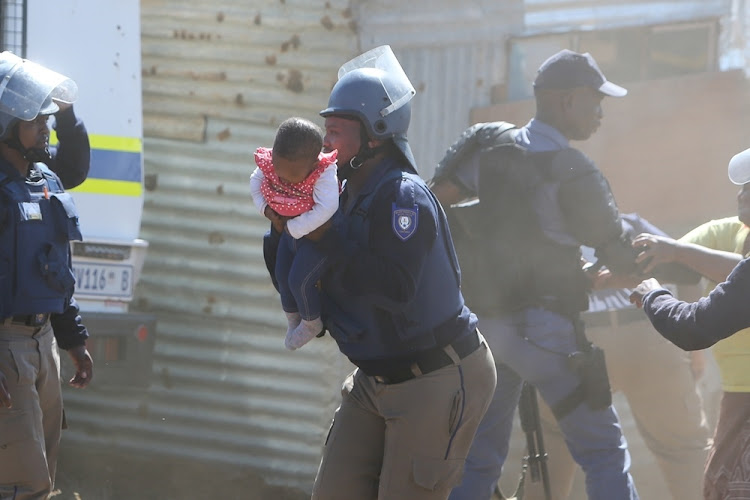 A Nelson Mandela Bay metro police officer takes the child to safety after her father threw her off the roof of a shack at the Joe Slovo informal settlement in Port Elizabeth on 12 April 2018.
Image: Werner Hills

Nojulumba‚ watching from below‚ held out his arms and caught the baby. Asked how he felt about the dramatic rescue‚ his humble reply was: “Good. I saved a life yesterday.”

“The man threw the baby. I managed to catch the baby‚” he added. He said the child’s mother appeared to want the baby to fall to the ground. She was telling police to leave the structure alone‚ “because there is no way they can live without that shack‚” he explained.

Asked what the first thing was that he did after catching the infant‚ he said: “The first thing in my mind was just to safeguard that baby.”

The baby was not injured. “There can be no injuries in the presence of the metro‚” he quipped.

He said other residents had supported the father when he was on the roof with the baby: “They threw stones at us.” 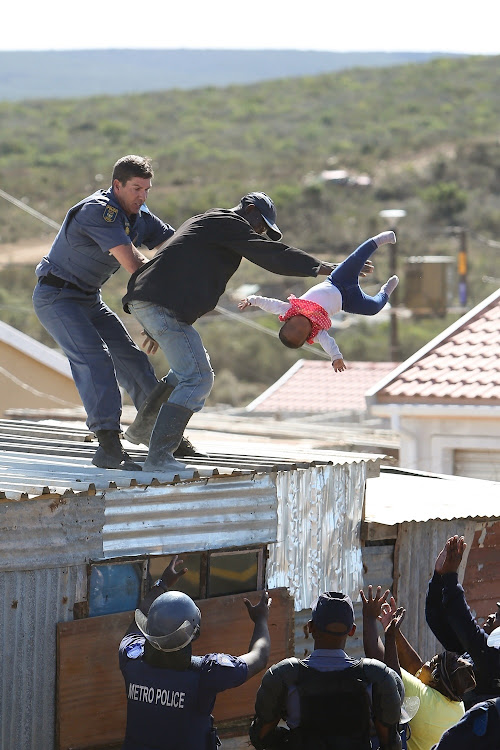 A Nelson Mandela Bay metro police officer grabs the father as he throws his child off the roof of a shack at the Joe Slovo informal settlement in Port Elizabeth on 12 April 2018.
Image: Werner Hills

Around 10.40am the father climbed onto the roof of his shack‚ holding his daughter in a bid to stop the team from demolishing the shack.

Around 11.45am police and metro police surrounded the shack and tried to negotiate with him to climb down.

“As the man was grabbed by police‚ he threw his child off the roof. Fortunately‚ a member of the metro police caught the girl and the father was arrested‚” Beetge said.

The father‚ who faces a charge of attempted murder‚ will appear in court on Monday.

The father who flung his six-month-old daughter from the roof of a shack will be charged with attempted murder.
News
4 years ago

National police commissioner General Khehla John Sitole says he hopes the life imprisonment served on a 29-year-old mother in connection with the ...
News
4 years ago

'Police assaulted my sister while I sat in labour'

At 40 weeks pregnant‚ Jessica* thought she was going into labour when she started experiencing severe pain on Saturday evening. Her sister’s ...
News
4 years ago