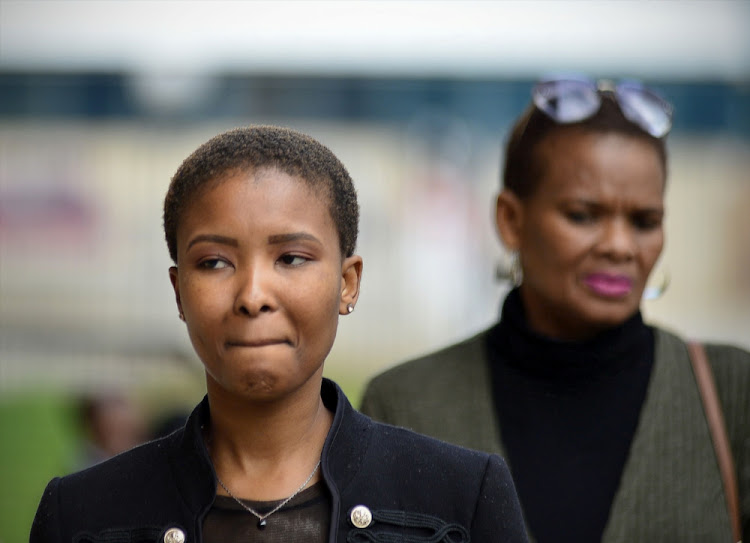 Karabo Mokoena spent her last birthday alive in hospital‚ nursing wounds allegedly inflicted on her by her boyfriend‚ the High Court in Johannesburg heard on Tuesday.

The 22-year-old was murdered a month later‚ allegedly by her on-and-off boyfriend‚ Sandile Mantsoe.

Karabo’s sister‚ Bontle‚ told the court that they had battled to get hold of her on her birthday. The next day Karabo informed her that she was at the Morningside Hospital.

Bontle‚ who was testifying in Mantsoe’s trial‚ said she rushed to the hospital to find her sister with a bruised eye‚ shoulder and leg. Karabo told her that Sandile had smashed her phone.

Bontle escorted Karabo to Sandile’s Sandton apartment‚ where she told her to get the last of her things. However‚ the 22-year-old had refused to go back home with Bontle‚ afraid of how she would have to explain her bruises. She opted to stay with a friend until she had healed.

The family and friends of Karabo Mokoena did not think it was possible that she could be with her alleged killer‚ Sandile Mantsoe‚ when she suddenly ...
News
4 years ago

The court was shown pictures of Karabo’s bruises‚ which she had sent to her sister and mother following the assault.

Bontle‚ who is the second witness to testify in Mantsoe’s trial‚ broke down when she told the court that her sister “would have done anything” for the man who now stands accused of killing her.

“The relationship was fine. I’m not sure when it started to change‚” said Bontle‚ who said Karabo had shared that at times‚ Sandile would address her in an unpleasant manner. “But one thing I know is that Karabo would do anything for Sandile‚ anything‚” said Bontle.

The sisters had been together with another friend‚ Michelle‚ when they met Sandile. The two had clicked and a relationship blossomed but when the trouble surfaced‚ Bontle said both she and her mother had urged Karabo to leave the relationship.

“Even my mother warned her. She said: ‘Leave this man‚ he will kill you‚’” Bontle said‚ breaking down again.

The sister of Karabo Mokoena‚ whose badly charred remains were found in a ditch in Lyndhurst last year‚ says she has struggled to lead a normal life ...
News
4 years ago

Karabo’s charred remains were found in a ditch in Lyndhurst in April last year. She had been doused with petrol and pool acid with a tyre placed around her before she was set alight.

Her family only discovered that the remains were hers days after going on a frantic search with her‚ even questioning Sandile on whether he had seen Karabo or not.

Bontle told the court that during the search‚ she and Karabo’s friend‚ Neo‚ had gone to Sandile’s apartment to view CCTV footage. While they were there‚ Sandile had arrived at the apartment with another lady in his vehicle. The 28-year-old forex trader vehemently denied seeing Karabo. “He was telling us a lot of stories‚ saying she knows a lot of people and she likes to hide herself‚” said Bontle‚ adding that he accused her of booking into hotels.

Moments before this‚ however‚ Sandile had been in a text conversation with a friend of Karabo’s‚ Stephanie Leong‚ telling her Karabo had been seen around Sandton‚ Bontle told the court.

The state on Monday again postponed the trial of Sandile Mantsoe‚ alleged to have killed his on-and-off girlfriend Karabo Mokoena‚ saying it had ...
News
4 years ago

“He was saying that she was driving around in Lamborghinis in Sandton and that she was with a Nigerian man‚” said Bontle.

After confronting Sandile at his apartment‚ Bontle said she left the place feeling uncomfortable and thinking that “something is wrong”. They later returned with her mother‚ Karabo’s friends and police from the Diepkloof police station. There‚ the mother confronted Sandile.