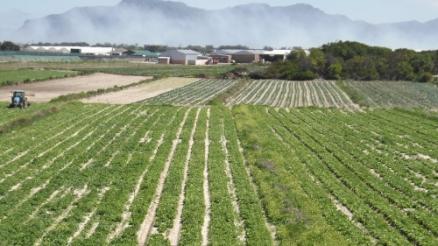 Years of urban creep‚ including two current housing development applications‚ have prompted an outcry from many farmers who feel their livelihood is under threat.
Image: Agrifarms via Google

As if the water crisis wasn’t bad enough‚ Cape Town risks running out of cheap fresh vegetables unless it protects a 1‚900-hectare veggie patch nestled in suburbia.

That’s the resounding message from a nine-month study into the viability of the Philippi Horticultural Area (PHA)‚ a massive stretch of farmlands being steadily eroded by property developers and informal settlements.

The PHA supplies most of Cape Town’s fresh vegetables thanks to its favourable micro-climate and plentiful water supply – it overlays a giant freshwater aquifer.

But years of urban creep‚ including two current housing development applications‚ have prompted an outcry from many farmers who feel their livelihood is under threat.

Ravaged by the ongoing drought‚ Nico Greeff‚ a grape farmer in Vredendal‚ says he will make no profit this season.
News
3 years ago

Now the Western Cape agriculture department has leapt to the area’s defence‚ insisting it will support the findings of the latest report – there have been several – which calls for the PHA to be preserved for job creation and food security.

“The provincial department of agriculture recognises the need to protect our natural environmental assets to ensure the sustainability‚ food security and resilience of the city and province into the future‚” said agriculture MEC Alan Winde.

The Western Cape is facing a jobs bloodbath as 50‚000 workers in the agriculture sector might get the sack due to the drought.
News
4 years ago

Winde said he would even consider teaming up with a civil society campaign in a current court bid to resist housing development in the PHA area. If he does so he would could find himself at loggerheads with Cape Town mayor Patricia de Lille and local government MEC Anton Bredell‚ who are supporting the developers against the PHA lobby group.

Speaking at a news briefing on Tuesday to mark the release of the report‚ Winde said his department would attempt to resolve some of the key challenges prompting some PHA farmers to sell their land. These include rampant crime and expensive farming input costs.

Said Winde: “What we will do is try to find ways that make agriculture in this area the viable choice so that you don’t want to sell your land.”

PHA farmer Achmat Brinkhuis said the farmlands were under siege from criminals who targeted infrastructure. “We have to be up all night looking out for people stealing our stuff – so we are farming during the day and night‚” Brinkhuis said.

The study‚ commissioned in July 2017‚ confirmed earlier findings that the PHA should retain its core agricultural focus in the best interests of the broader Cape Town commuity.

Winde said the immediate challenge was to find ways to make this possible‚ such as engaging with all tiers of government and setting up joint management structures.

The Cape’s water crisis is inconvenient for humans‚ but for wild animals it is potentially lethal.
News
3 years ago

Book and art lovers may want to swot up on the "great unwashed" style that some followers of grunge music adopted in the 1980s‚ because the Cape ...
News
3 years ago

No 90-second showers for luxury-loving Bongo