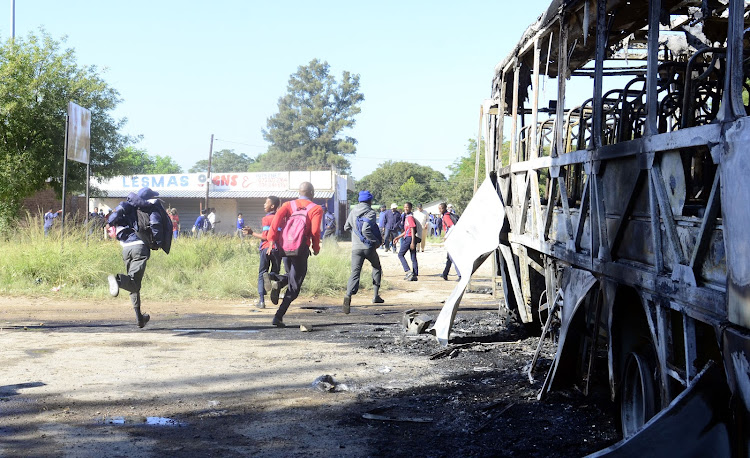 School children run near a burnt bus as residents of Mahikeng protested on the streets of Mahikeng demanding the resignation of Premier Supra Mahumapelo.
Image: Tiro Ramatlhatse

One man has died in Mahikeng‚ the North West capital which has been rocked by violent protests against premier Supra Mahumapelo.

The man‚ believed to be one of the protesters‚ died in a car chase between police and protesters‚ in an area called Airport View‚ on Thursday evening.

BREAKING NEWS: The #Mahikeng protests has claimed its first victim. Police confirmed that one person has died.

Police spokeswoman Adele Myburgh confirmed the incident‚ but said police had nothing to do with the death.

"The protester died in a motor car accident in the quantum they were driving in‚” she said.

Myburgh added that police were trying to chase away protesters who barricaded the roads. Three other people were injured. It is unclear what hospital they were sent to as hospitals were shut down in the town.

Rubber bullets were also fired in the town's CBD on Thursday night.

Ramaphosa calls for calm in Mahikeng

President Cyril Ramaphosa has called for calm in the tense town of Mahikeng after two days of violent protests against embattled premier Supra ...
Politics
4 years ago

Mahikeng residents vow protest will continue until their demands met

North West capital Mahikeng on Thursday resembled a ghost town with a number of shops closed amid a violent protest.
News
4 years ago