The Bulldog versus the Commander-in-Chief: Malema and Nel prepare for battle 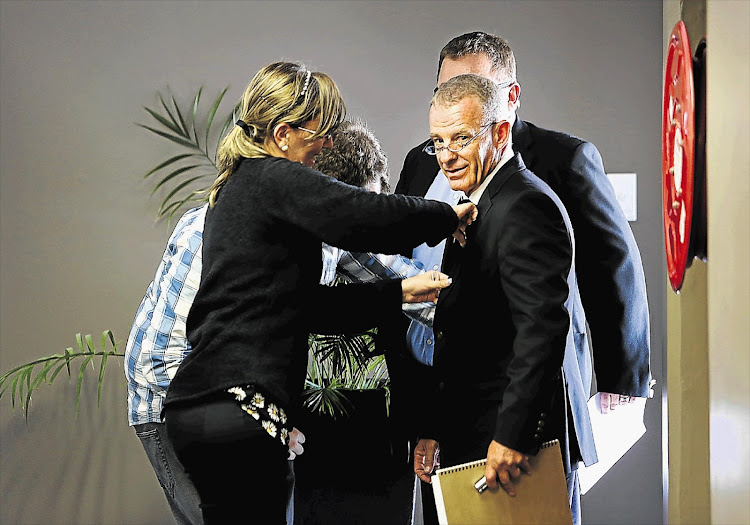 It could turn out to be the battle of the decade: The Commander-in-Chief versus the Bulldog‚ namely EFF leader Julius Malema against former public prosecutor Gerrie Nel.

"If the NPA did their job‚ we would not come into the picture. Mr Malema cannot cry...We will continue taking him on without apologising for it‚" said AfriForum CEO Kallie Kriel.

Charges against Malema and his co-accused were struck off the roll on August 4 2015. His co-accused was said to be ill at the time. AfriForum has now indicated to the National Prosecuting Authority that it wants to privately prosecute Malema if the NPA decides not to go ahead with the case.

Economic Freedom Fighters leader Julius Malema said on Thursday that he was prepared to face prosecution for fraud and corruption.
Politics
3 years ago

"We are planning to prosecute Mr Malema on charges of corruption and fraud. If somebody portrays himself as somebody that fights for the poor‚ when such a person goes and steals taxpayers' money...we believe such a person should be held accountable. That is why we are going ahead with this case‚" Kriel said.

Malema was also ready for a fight.

"Bring it on bloody racists‚ you don't scare me at all. I'm born ready! No white man will decide my destiny‚ the poor masses of our people will‚" Malema tweeted on Thursday.

EFF chairperson Dali Mpofu told eNCA that there was no legal basis for AfriForum's action against Malema. He dismissed it as nothing more than a "political tantrum" in response to the EFF's land expropriation drive.

Nel‚ who famously grilled Oscar Pistorius during his murder trial‚ will lead the private prosecution. He said the original Malema indictment contained two charges of racketeering‚ five corruption charges‚ four fraud charges and 40 counts of contravention of Section 6 of the Prevention of Organised Crime Act.

Nel said their general search showed that Malema's co-accused was later in good health and was even seen at public events.

The case stems from a tender won by On Point Engineering to advise the Limpopo government on infrastructure projects. Malema was a director of On Point but later resigned.

In March AfriForum submitted a written inquiry to establish if and when the NPA intended to put the matter back on the court roll. But AfriForum were informed that the matter had moved from its original prosecution team to the Priority Crime Litigation Unit‚ Nel said.

The head of the unit‚ Torie Pretorius‚ said the NPA would indicate on or before August 2018 whether there would be a prosecution. Nel said it was peculiar to take the matter to the PCLU.

"What we know is that a very senior prosecutor in the NPA was allocated the matter. He drafted the charge sheet and indicated to court that the matter was court-ready and the state was ready to proceed‚" Nel said.