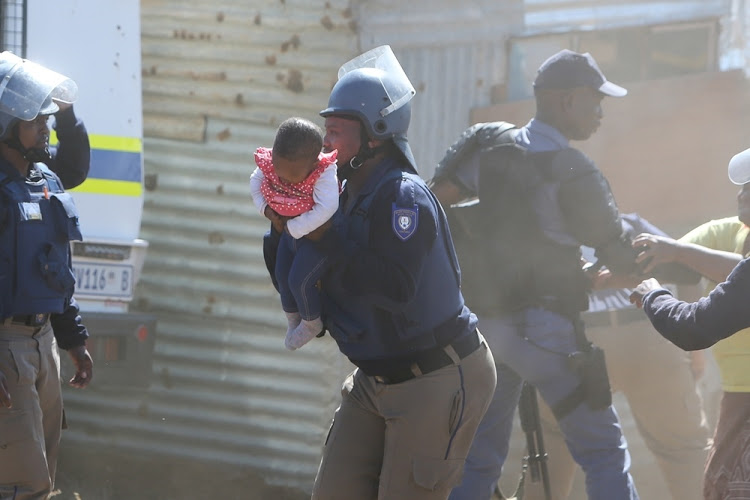 A Nelson Mandela Bay metro police officer takes the child to safety after her father threw her off the roof of a shack at the Joe Slovo informal settlement in Port Elizabeth on 12 April 2018.
Image: Werner Hills

The 38-year-old father from Port Elizabeth who flung his baby off a shack roof earlier this month‚ was released on a warning by the New Brighton Magistrate’s Court this morning.

The child abuse charges were retained but he was released due to a petition brought before court deeming him unable to pay for bail as he has no money.

Community members and his 35-year-old wife were elated at the news as the couple returned to Joe Slovo township where they will be temporarily staying with a neighbour.

He has been instructed by the court to arrange visits with his one-year-old daughter‚ who is under the supervision of a social worker in Uitenhage.

The case will return to court on May 29.

HeraldLIVE photographer, Werner Hills captured the moment a father threw his baby off the roof of his shack in Joe Slovo informal settlement in Nelson Mandela Bay.

HeraldLIVE photographer Werner Hills recalls the chilling moment when a father threw his baby from the roof of his shack.
News
3 years ago

A man trying to stop police from demolishing his shack has been arrested for attempted murder after hurling his six-month-old baby off the roof of ...
News
3 years ago

A metro police constable has been hailed as a hero after he skillfully caught a baby who was flung off the roof of a shack during a stand-off with ...
News
3 years ago