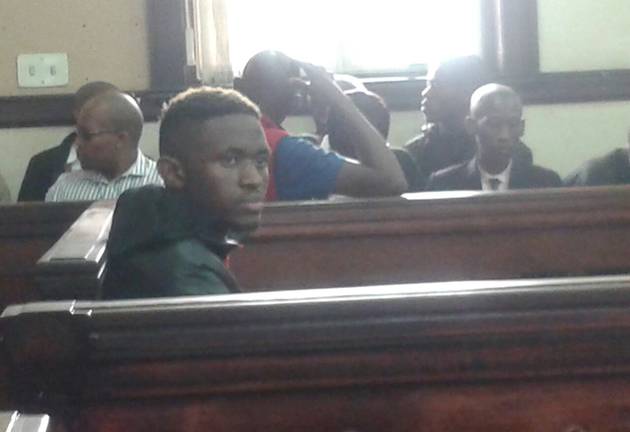 The state has abandoned its bid to have Karabo Mokoena’s own words of how she was battered and bruised by her alleged killer‚ Sandile Mantsoe‚ entered into evidence.

Prosecutor Mike Hlatshwayo had informed the High Court in Johannesburg on Wednesday that he wanted to call to the stand the police officer who took down Mokoena’s statement when she went to open the assault case against Mantsoe.

This would have led to the officer taking the court through Mokoena’s statement in which she detailed how Mantsoe had assaulted her‚ leaving her with a bruised eye‚ leg and shoulder in March 2017 – a month before her charred remains were found in a ditch in Lyndhurst.

Besides the murder charge‚ Mantsoe is facing a charge of assault with intent to cause grievous bodily harm in connection with the assault.

CCTV footage showing Sandile Mantsoe entering and leaving his luxurious Sandton apartment with a dustbin containing the body of his girlfriend‚ ...
News
3 years ago

“So you want to prove the charge by means of hearsay evidence?” Judge AJ Johnson asked Hlatshwayo.

“Yes‚” he answered‚ adding that this would corroborate the testimony of Mokoena’s friend‚ Stephanie Leong. Leong had told the court she had heard of the assault and that Mokoena had sent her pictures of the bruises.

Johnson questioned whether the police officer’s testimony about Mokoena’s alleged assault would not prejudice Mantsoe as that statement could not be challenged under cross-examination.

Hlatshwayo‚ who argued that case law allowed the submission of hearsay evidence‚ disputed that Mantsoe would be prejudiced. He claimed that cross-examination was not the only way to prove a case.

Mantsoe’s lawyer‚ Victor Simelane‚ said he would oppose the state’s application. Johnson advised Hlatshwayo to reconsider the application. He later decided to abandon it.

The state is on the brink of wrapping up its case. Just three more witnesses are expected to take the stand.

Mantsoe‚ who is a forex trader‚ is standing trial for murdering his 22-year-old girlfriend in April last year. The married father of three‚ who is estranged from his wife‚ claims he had come home from a business meeting and found Mokoena had committed suicide in his apartment. He alleged that she had stabbed herself in the neck.

He said out of fear that he would be blamed for the death of his on-and-off girlfriend‚ he had disposed of her body by drenching it in petrol and pool acid and placing a tyre around it before setting it alight.

However‚ one police officer has testified that Mantsoe had said Mokoena needed to die to break a blood ritual that they had entered into in order to boost his business dealings.

The officer alleged that Mantsoe had claimed his business had begun to suffer as a result of the two of them splitting up. In order to reverse his fortunes‚ a sacrifice had to be made in the form of Mokoena‚ the court heard. Mantsoe has denied these allegations.

A post-mortem failed to determine what exactly killed Mokoena as her body was too badly burnt. Mantsoe faces charges of premeditated murder‚ defeating the ends of justice and assault with the intent to do grievous bodily harm. He has pleaded not guilty to the charges.

Video footage taken outside murder accused Sandile Mantsoe’s apartment in Sandton last year was not played in the Johannesburg High Court on Friday ...
News
3 years ago