Bus strike: unions and employers to go back to the negotiation table 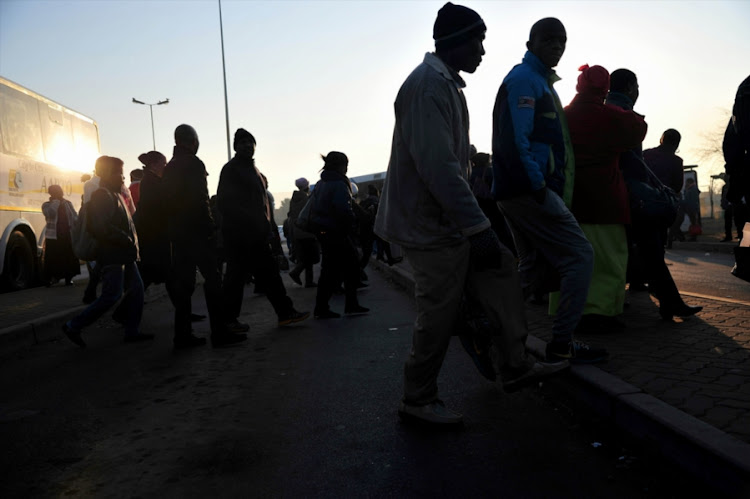 Taxi commuters The national bus strike‚ which is in its second week‚ has left commuters across the country stranded.
Image: Gallo Images / Sowetan / Veli Nhlapo

The national bus strike could soon end as unions and employers are going back to the negotiation table.

Zanele Sabela‚ a spokesperson for the SA Transport and Allied Workers Union (Satawu)‚ said after the unions met early this week‚ they decided to invite employers for another round of wage negotiations.

“On Monday when we met‚ we decided it is our responsibility to invite the employers back to the negotiation table. We then wrote to the bargaining council to request a meeting with employers so we can continue negotiations‚” Sabela said.

Commuters will have to continue making alternative transport arrangements as the national bus strike enters its second week.
News
4 years ago

President Cyril Ramaphosa has called for workers to always consider the rights of vulnerable groups during strikes.
Politics
4 years ago

The national bus strike‚ which is in its second week‚ has left commuters across the country stranded. The strike followed after wage negotiations in the industry deadlocked last month.

The decision followed after negotiations with employers‚ mediated by the Commission for Conciliation‚ Mediation and Arbitration (CCMA) broke down.

President Cyril Ramaphosa on Tuesday acknowledged that the proposed national minimum wage of R20 per hour or R3‚000 monthly was not a normal living ...
Politics
4 years ago

The general secretary of the SA Federation of Trade Unions (Saftu)‚ Zwelinzima Vavi‚ says unions must maintain their independence and deal with the ...
News
4 years ago

The big guns were called in on Thursday in a bid to try to bring an end to the national bus strike as it entered its ninth day.
News
4 years ago