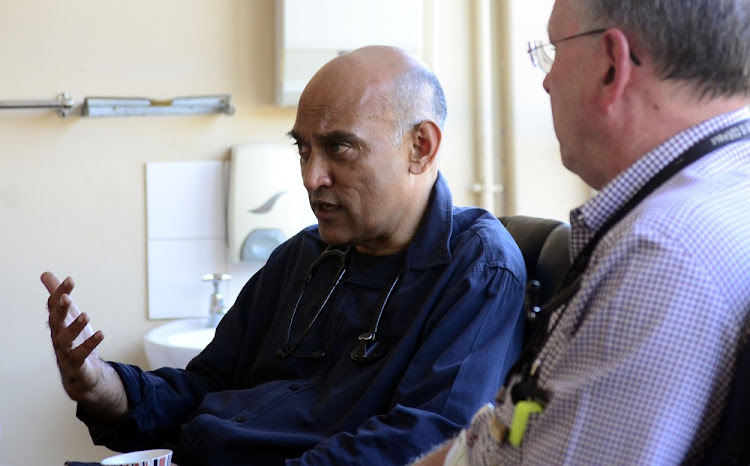 Protesters are again blocking access to hospitals in the North West and are threatening to burn doctors who try to access their workplaces to treat patients.

On Friday morning, protesters blocked access to Potchefstroom hospital. Doctors trying to access the hospital have been threatened with being burnt said Dr Ebrahim Variava‚ a Wits professor and specialist at Tshepong hospital.

He is monitoring the impact of the protests ​on his colleagues and the hospitals serving poor and disadvantaged patients.

One doctor took a video of burning tyres outside the hospital. Another doctor sent Variava pictures of strikers who were removing doctors from wards of Klerksdorp hospital.

Klerksdorp is a referral hospital treating the sickest patients from across the province but is now short-staffed‚ he explained.

This comes as the SA National Defence Force claimed that its involvement in the crisis had rendered the situation back to normal.

Healthcare in the North West back to normal: SANDF

The South African National Defence Force (SANDF) said on Friday it had brought the health system in the North West to a level of normality.
News
3 years ago

Union Nehawu has been on a go-slow in the province since February‚ disrupting medicine supply at the main medicine warehouse and is now keeping nurses from work. The union is tired of corruption in the health sector and a shortage of medical staff in hospitals.

There are apparently more than 1‚000 less posts for doctors and nurses in the past three years‚ according to the Rural Health Project. The union also wants Premier Supra Mahumapelo to resign.

Variava was one of the authors who wrote a letter last week on behalf of 70 doctors calling for an intervention in the province‚ saying the continued delayed access to healthcare meant patients could not be treated quickly.

The letter also said TB patients were not taking medicines on time due to medicine stock outs and this could cause drug resistant TB in patients‚ which could spread. It added that pregnant women were not being managed well due to the disruptions‚ which could have bad - or even deadly - consequences for the baby or the mother.

The letter was a desperate plea for intervention to stop the Nehawu strikers disrupting hospitals.

DA request probe of police conduct in the North West

The DA has called on the Independent Police Investigative Directorate (Ipid) to probe the conduct of SAPS members in the North West following violent ...
Politics
3 years ago

On Friday‚ a national task team of government members was visiting the embattled province.

“While health allocations will rightfully be under scrutiny‚ we draw attention to the loss of 1299 health posts between 2015 and 2017 due to ‘austerity measures’ and call upon a process that prioritises critical health posts to ensure access to healthcare for all‚” the letter said.

The doctors have also asked that they task team deal with the fact that hospital security is not able to stop mobs of people storming hospitals. Civil rights group Section 27 on Friday condemned the violence at hospitals.

In a press statement it said: "The violence and disruption of healthcare services is leading to immediate loss of life as patients are denied entry to health facilities and doctors and others are prevented from providing care.

"Some of the reports we have received include protesters invading theatres‚ threats to the lives of doctors‚ doctors being forcefully removed from hospital wards and entrances to hospitals being blocked off‚ meaning no supplies or drugs can be delivered.

“We consider such forms of protest to be grossly irresponsible and morally reprehensible."