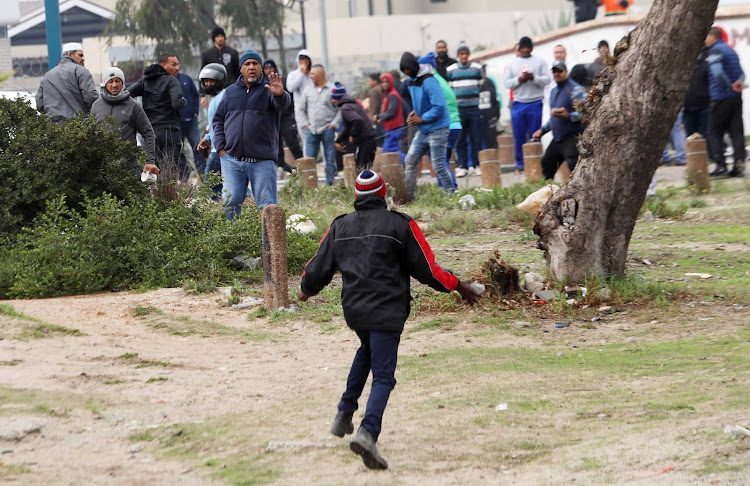 A violent service delivery protest saw property being torched, roads closed and informal settlement residents clash with their neighbours at Mitchells Plain in Cape Town on 2 May 2018.
Image: Esa Alexander

This week‚ residents of the Siqalo settlement clashed with police and became embroiled in a racially charged confrontation with their neighbours in Mitchells Plain. They were demanding land and electricity.

De Lille‚ speaking on Friday at the opening of a municipal court in Lentegeur in Mitchells Plain‚ explained that Siqalo was situated on privately-owned land.

“I have got several letters that we have written to (the landowner)‚” she said.

The landowner wants the city to purchase the land but it is deemed to be unsuitable for development due to extensive sand mining activities there. The city has provided water to residents but needs permission to provide electricity to the informal settlement.

Speaking about the violent protests this week‚ De Lille said: “We have been able to secure the peace now. We have agreed to meet with the community within seven days to address all of the other issues‚ because even though it is on private land‚ the city has been providing water.

“We have started the EPWP [Expanded Public Works Programme] by employing local people to remove the refuse. Every single structure there has got refuse removal so we are providing services but the people want electricity… and we are not allowed to put infrastructure on private land.

Quiet in Mitchells Plain after shootout between police and residents

The streets of Mitchells Plain were quiet on Friday morning after a night of violence in the Cape Flats township.
News
4 years ago

Residents of Mitchells Plain have put the blame for Wednesday’s violent protests “should be laid at the door of the South African Police Service ...
News
4 years ago

“But if we get a servitude agreement from the owner we can do so and that is where the owner is playing around with us and not wanting to give us permission. Then he tells the community it is the city that is refusing to give you electricity‚” she said.

She said that residents had invaded the land‚ which was not suitable for building on.

“We cannot‚ as government‚ provide services on private [land] but even though the law says that‚ as the city‚ we have responded on humanitarian grounds. We are providing refuse removal‚ we are proving water‚ we are providing sanitation. But on city-owned land around that piece of land. So we have risen to the occasion to respond to the humanitarian needs of the people of Siqalo‚” she said.

We are not allowed to put infrastructure on private land.

At the opening of the municipal court‚ Deputy Minister of Justice and Constitutional Development John Jeffery said because the Mitchells Plain Magistrate’s Court had a high volume of cases‚ the new municipal court would serve to alleviate backlogs.

“The court is operational. There is an acting magistrate appointed who is sitting. I am not sure of the number of cases but we sit every week‚ every day. It is effectively a traffic court and a municipal by-law court‚ so it is primarily dealing with traffic offences but it can also deal with municipal by-laws. An additional court in Mitchells Plain means a speedier way to hand down justice.”

There are more than 11 municipal courts in the Cape Metropole. De Lille described the R4.7-million ploughed into the new municipal court as a “good investment”.

Mitchells Plain community activists said that widely circulated social media messages warning of a lockdown in the Cape Town suburb ahead of a march ...
News
4 years ago

WATCH | The horrific moment a taxi drove into Mitchells Plain protesters, killing one

At least one person died when a taxi ploughed through a barricade during violent protests in Mitchells Plain, Cape Town, on Wednesday night.
News
4 years ago

Police reinforcements have been deployed in Mitchells Plain‚ where one person has died and two have been injured in violent service delivery protests.
News
4 years ago