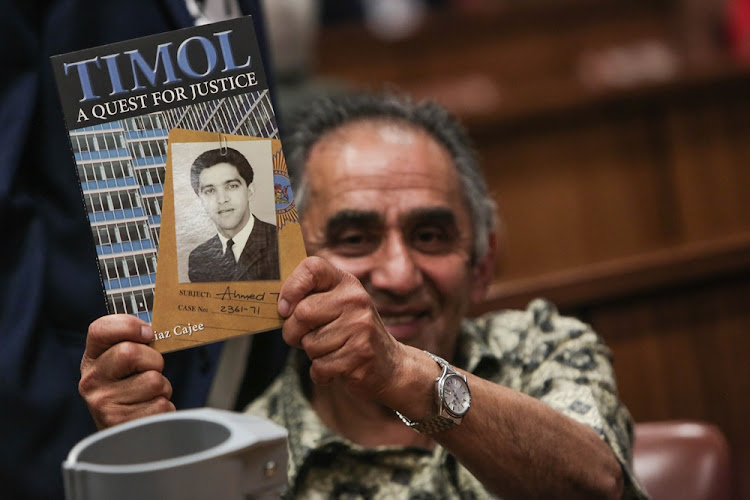 Ahmed Timol’s brother, Mohammed, holds out a book written by his nephew Imtiaz Cajee ahead of the judgment into Ahmed's death at the North Gauteng High Court in Pretoria on 12 October 2017.
Image: Alaister Russell

The team of investigators‚ lawyers and human rights advocates behind last year’s reopening of the 46-year-old inquest into the murder in police custody of Ahmed Timol is appealing to South Africans for information relating to eight more atrocities allegedly perpetrated by apartheid-era police.

In its final report the TRC recommended these and other cases be investigated for purposes of prosecution‚ but nearly 20 years later scant progress has been made‚ the lawyers say.

After many years of campaigning by the Timol family‚ the inquest into the death of Ahmed Timol was reopened last year‚ and the inquest finding altered from one of suicide to murder at the hands of police.

The team that supported the Timol family‚ including representatives of the Foundation for Human Rights‚ Legal Resources Centre‚ Khulumani Support Group and law-firm Webber Wentzel‚ internationally reknown detective Frank Dutton‚ Advocate Howard Varney‚ and the nephew of the late Ahmed Timol‚ Imtiaz Cajee‚ says it is now applying its collective mind to more travesties of justice.

Archbishop Emeritus Desmond Tutu said he viewed the initiative as part of the TRC’s “unfinished business”.

“The families of the victims have waited far too long for justice. Information leading to the resolution of these cases will bring closure and healing not only to these families‚ but also to the nation. It will contribute to developing a caring and compassionate society‚ besides preserving the memory and dignity of those who laid down their lives for our democracy‚” Tutu said.

Veteran advocate Fanie Cilliers SC who has died at the age of 81 was involved in the first inquest into the death of anti-apartheid activist Ahmed ...
Politics
3 years ago

Progress in the case of Ahmed Timol: family

The Timol family has received a letter from the National Prosecuting Authority (NPA) informing them it has instructed police to open three dockets ...
News
4 years ago

Tears welled up the eyes of renowned anti-apartheid lawyer George Bizos after the Pretoria High Court’s inquest into the death of activist Ahmed ...
News
4 years ago

The Pretoria high court has pointed out key lessons for a democratic South Africa‚ drawn from the reopened inquest into the death of activist Ahmed ...
News
4 years ago