‘It looked like a slaughterhouse’ – eyewitness to KZN mosque attack 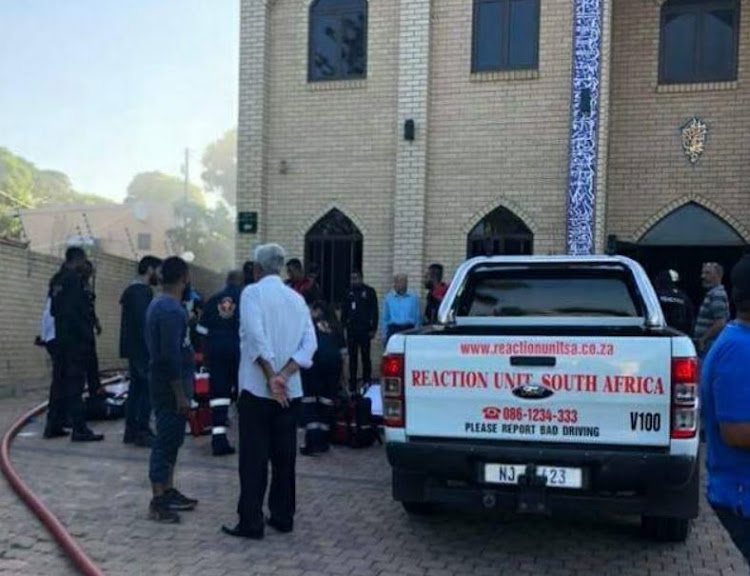 A man who arrived at the scene of a bloody mosque attack in Verulam‚ north of Durban‚ likened the scene to that of a slaughterhouse.

One man was killed and two others were critically injured in the attack‚ which saw three men storm the building shortly after afternoon prayers.

The eyewitness‚ who arrived at the scene shortly after the knife-attack‚ said that what he was confronted with was jarring.

“The mosque [and the area in front of the building] looked like a slaughterhouse…there was so much blood on the floor‚” he said.

One of the men who came under attack at a Verulam‚ KwZulu-Natal‚ mosque on Thursday afternoon has died.
News
4 years ago

The man‚ who would not be named‚ said that he’d arrived to find one of the wounded lying on the floor.

“His neck was open…I can’t tell you how traumatic that was…I even saw one paramedic there go weak.

“The whole place was on fire‚ but obviously at the time we were more concerned about the people who were hurt. Two of them were rushed away but one of the men from there was still being seen to by paramedics.”

The dead man was expected to be buried on Thursday night in line with Islamic custom.

The death of the man comes as police were trying to piece together what prompted the attack.

KZN police spokesman Captain Nqobile Gwala said that a manhunt had been launched for the three attackers.

"They allegedly attacked three people and stabbed them. They further set certain rooms alight and fled in their getaway vehicle.

Three fighting for their lives as KZN mosque comes under attack

Three men stormed a Verulam mosque on Thursday afternoon‚ slitting the throats of at least two people and stabbing another.
News
4 years ago

"The victims were taken to hospital for medical attention. The motive for the attack on the three men is unknown at this stage‚" said Gwala.

Verulam police are investigating counts of murder and attempted murder as well as arson. No arrests have been made at this stage.

A third victim was found inside the building. He was bleeding from a “wound to his throat”.

He said that witnesses told officers that three men‚ who were armed with knives and guns‚ “attacked the mosque‚ slitting the victims’ throats and then set fire to the building”.