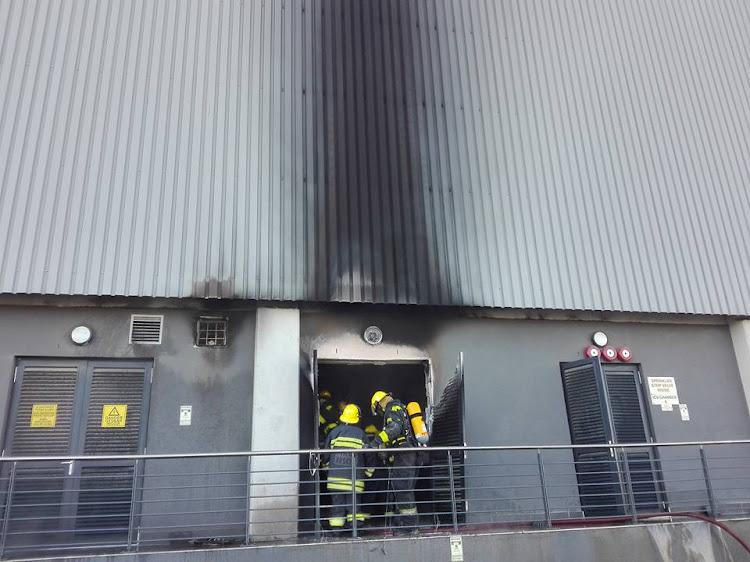 Cape Town fire and rescue services try to contain the fire at a Shoprite warehouse in Cape Town on May 15, 2018.
Image: Resq Medix

An electrical contractor was killed and two colleagues seriously burnt when a transformer exploded and caught fire during an inspection at a Shoprite distribution warehouse in Cape Town on Tuesday.

The Shoprite Group said the explosion happened at its Cilmor Distribution Centre in Brackenfell.

“An electrical contractor tragically lost his life this morning in an explosion while inspecting an electrical transformer...  Two other contractors suffered serious burn injuries and were rushed to hospital. A further four people are being treated for smoke inhalation‚” the group said in response to media enquiries.

“The fire that broke out as a result of the explosion was extinguished within an hour and was contained in a small area of the Returns Centre. A full investigation is under way to determine the cause of the explosion and extent of the damage. At this stage it seems that operations will not be affected for a prolonged period of time.”

The Shoprite Group expressed its sincere condolences to the families and colleagues of the deceased and injured. Trauma counselling was being provided to those who witnessed the accident‚ it said.

Cape Town Fire and Rescue spokesman Theo Layne said earlier: “The City’s Fire and Rescue Service responded to Cilmor Street in Brackenfell (to) a Shoprite warehouse where we had a transformer room that was alight.

“Cape Town fire and rescue services managed to contain the fire within seconds while medical staff and attended to the injured‚ thank you ER24‚ Cape Town Fire and Rescue‚ SJC security‚ Titanium security and Metro Rescue for their assistance on scene.”

1 patient was declared DOA , 3 patients transported to hospital and multiple patents treated for smoke inhalation after...

Earthmoving machines‚ a staff canteen and quad bike were petrol bombed by an angry crowd which attacked a landfill site after a thwarted land grab in ...
News
2 years ago

The City of Johannesburg Emergency Management Services will be on high alert over the next few days to respond to any emergencies as the city braces ...
News
2 years ago

An eShowe farmer‚ fearing for his life‚ managed to flee his home just hours before it was overrun by a mob of rioters on Sunday night.
News
2 years ago
Next Article