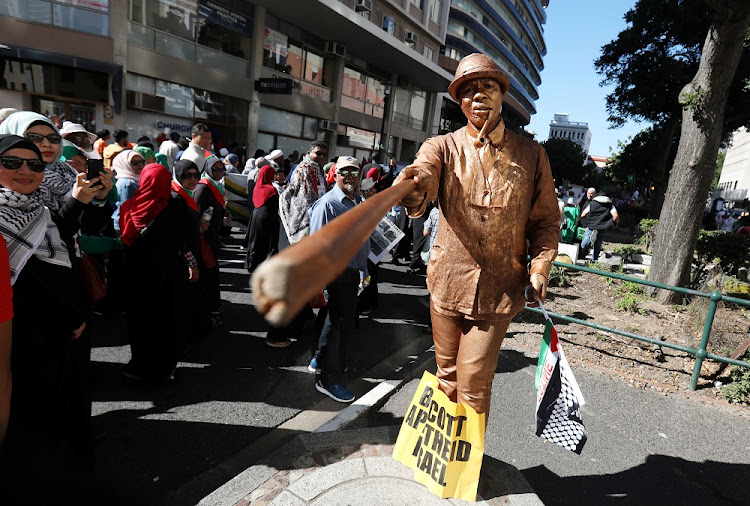 Hundreds of people marched on parliament in Cape Town on Tuesday in solidarity with protesters in Gaza and Israel‚ and in protest of violence in the region on Monday.

Political and religious leaders taking part in the march called for the expulsion of the Israeli ambassador in South Africa following the killing of around 58 Palestinian protesters by Israeli authorities on Monday.

This follows the withdrawal of South Africa’s ambassador to Israel on Monday evening‚ with South Africa’s department of international relations and cooperation issuing a strong condemnation of what it called “violent aggression carried out by Israeli armed forces”.

The march in Cape Town echoed the Palestinian protest - called the “Great March of Return” - which started in March this year and has seen daily protests along Israel’s border fence with Palestinian territory.

Monday was also the 70th commemoration of the creation of Israel‚ a happy day for most Israelis‚ and which coincided with the opening of a new US embassy in the city of Jerusalem‚ a holy place for the Jewish‚ Muslim‚ and Christian faiths.

For the Palestinians‚ however‚ the day is referred to as the Nakba‚ or the catastrophe‚ and marked the start of displacement from their homeland by the creation of Israel‚ followed by continuing land grabs by the state of Israel.

The opening of the US embassy in Jerusalem on Monday also meant the symbolic recognition of Jerusalem as the Israeli capital‚ a move which has been condemned internationally as a provocative and a threat to peace in the region.

One of the leaders of the march‚ and former Muslim Judicial Council president‚ Sheik Ebrahim Gabriels said they “respected and honoured” the South African government’s withdrawal of its ambassador from Israel and he asked that the Israeli embassy in Pretoria be closed.

“It is just a pity that the rest of the world is silent‚ but we in South Africa will never be silent‚” he said.

He also condemned US president Donald Trump’s decision to open an embassy in Jerusalem.

He said that there were Christians‚ Hindus‚ and Jews present at the march‚ adding that it was a hallmark of the “spirit of South Africa”.

“It is heartwarming to see even our cousins‚ the Jews‚ our brothers and sisters‚ are coming here today in support of Palestine‚” said Gabriels.

Anglican church Reverend Canon Desmond Lambrechts said that the church showed “solidarity of compassion” with the people in Palestine.

“We are not supporting the violent actions. We believe there should be dialogue‚ there should be courageous conversations around the challenges that affects the humanity in the Gaza strip‚” he said. “Political leaders and other stakeholders‚ and church leaders should come together and discuss and talk about the plight that the people are facing‚ and violence is not the means towards the end. There should be other ways of finding an amicable solution.”

The South African government has withdrawn its ambassador to Israel following a deadly attack in the Gaza Strip in which more than four dozen ...
Politics
2 years ago

Israeli forces killed at least 41 Palestinians along the Gaza border on Monday as angry protesters demonstrated at the frontier on the day the United ...
News
2 years ago
Next Article