'Lawyer' accused of fraud plays 'hide-and-seek' with the law 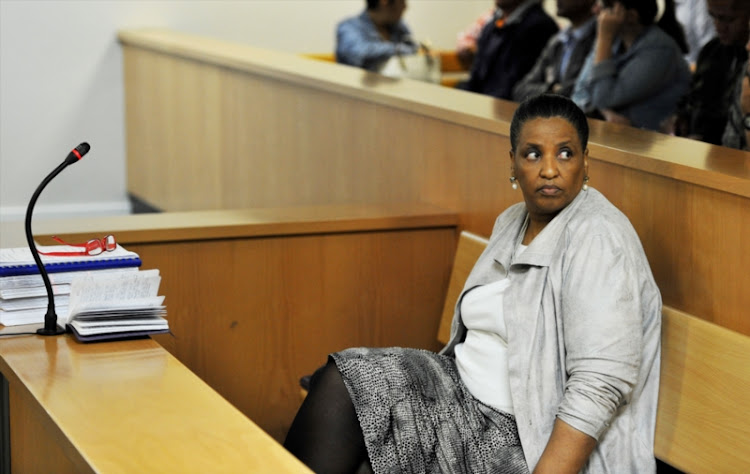 She provided marathon analysis on the SABC during the murder trial of Paralympian Oscar Pistorius. But this month she failed to convince the high court to compel prison authorities to allow her access to the internet in her cell – “day and night”.

Her bid for freedom also failed. Wardle‚ who is incarcerated at the Port Elizabeth Correctional Centre‚ is facing fraud charges in the Port Elizabeth Commercial Crimes Court for allegedly milking an Eastern Cape dairy farmer‚ who was jailed for murder‚ out of more than R500,000.

According to the prosecution‚ Wardle pretended to be a lawyer and promised to assist Stephanus van Aardt with an application for his early release on parole between 2009 and 2013. In doing so‚ she pocketed R538‚766. At the time‚ the Somerset East farmer was not eligible to have his 12-year prison sentence converted to parole.

Van Aardt was convicted in 2007 of murdering 15-year-old Eliot Magabane whom he hit with a spade. The boy had six broken ribs and brain injuries.

Wardle was charged with fraud in 2014 but skipped bail and was arrested in East London more than a year later. She has insisted on representing herself in her wrangles with the law.

Illovo Sugar South Africa warned job seekers on Tuesday about an employment scam run by fraudsters who are offering bogus jobs at the company in ...
Business Times
3 years ago

Two people have appeared in the Nelspruit Regional Court for defrauding the Mpumalanga department of education R6-million in a bogus feeding scheme.
News
3 years ago

She sued the minister of justice and correctional services‚ and senior officials in the department‚ last month at the High Court in Port Elizabeth. She wanted the court to compel them to allow her to use a laptop and an internet modem in her cell to prepare her defence and to register for online studies. The department opposed the application and said that Wardle’s “entitlement to the internet modem was limited to its use only under… supervision and in a designated area”.

“The [department’s] acquiescence in permitting [Wardle] the use of her laptop in her cell is an indulgence not accorded to other inmates and granted‚ no doubt‚ as salutary gesture‚” said Judge Dayalin Chetty.

“The modem can be accessed and used throughout the course of the day and there is no plausible explanation tendered by [Wardle] why such use will impact deleteriously upon her trial preparation. An inmate’s usage of a laptop and modem within the confines of a prison falls within the competence of the Department of Correctional Services and I am unpersuaded that the restrictions imposed … are unreasonable. The application is dismissed.”

Her history of evading court appearances put paid to her bid for freedom.

According to the judgment‚ Wardle “holds both a bachelor and master of laws degree and that she is presently engaged in doctoral studies. She has styled herself as a legal analyst. Thus‚ although she has represented herself as a lay person‚ she is anything but a lay person without knowledge of law and legal procedure.”

The Fisheries Department’s finance chief and three other officials could face criminal charges of fraud and corruption after a forensic investigation ...
News
3 years ago

Former president Jacob Zuma’s self-appointed deadline for a fresh bid to keep him from facing fraud and corruption charges is set to expire on ...
Politics
3 years ago

The 10-page judgment shows how Wardle played hide-and-seek with the courts:
• On May 12‚ 2014‚ she was formally charged and released on R3 000 bail. The trial was set to commence on April 20‚ 2015. She failed to appear in court and a warrant was issued for her arrest.
• April 28‚ 2015‚ she presented a medical certificate in court and the warrant was cancelled.
• On June 19‚ 2015‚ she failed to appear in court and a warrant for her arrest was issued but stayed until July 3‚ 2015.
• She forfeited her bail on July 17‚ 2015.
• On July 28‚ 2015‚ she represented herself in court and provided a medical certificate explaining her previous absence. She was released the her on warning. The case was postponed so she could appoint a lawyer; and
• On March 29‚ 2016‚ she absconded and “advised the investigating officer that she was ill due to high blood pressure”. Another warrant of arrest was issued. She was arrested in East London 15 months later and has been denied bail since then.

“The magistrate’s finding that there is a likelihood that the appellant would seek to evade trial should she be admitted to bail cannot‚ in my view‚ be faulted‚” said Goosen.

“The finding was based on a careful appraisal of the history of the matter; that she had on numerous occasions failed to appear at trial; that she had previously failed to comply with her bail conditions and had forfeited bail moneys to the state in respect of matters before the courts in Port Elizabeth and in Gauteng. It was on the strength of this finding that the magistrate concluded that the appellant had failed to discharge the onus which rested upon her.”