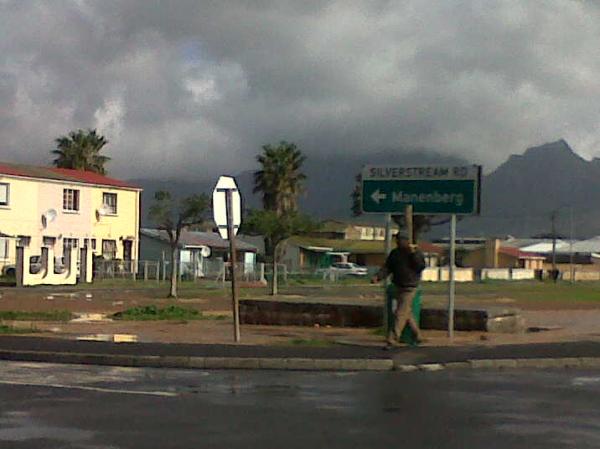 “We need to look at the root cause behind why people are killing each other. Is that 58-year sentence meant to rehabilitate the person? How does it contribute to bringing about positive change in your community?” asked community members.
Image: Mary-Anne Gontsana via GroundUp

Ashley shot and killed 16-year-old Claude Peters and 30-year-old Ashley Arendse in Lillian Court‚ Manenberg‚ on 20 November 2016 in what was reported to be a gang-related shooting.

Die Son reported at the time that on the day Peters and Arendse were killed‚ two other youngsters were killed on the Cape Flats‚ including 12-year-old Jason Booysen‚ who was struck in the head by a stray bullet from a gang fight while returning home from a shop.

Peters and Arendse became part of Manenberg’s horrific statistics. In 2016 there were 60 murders and 130 attempted murders‚ according to Crime Stats SA.

The precinct‚ however‚ did not even make it into Cape Town’s top ten worst in terms of murder‚ notwithstanding the near daily shootings in the area.

Outspoken community activist and leader of Proudly Manenberg‚ Mario Wanza‚ questioned the effectiveness of lengthy sentences for the rehabilitation of individuals.

“We need to look at the root cause behind why people are killing each other and why people are getting 58 years imprisonment. Is that 58-year sentence meant to rehabilitate the person? How does it contribute to bringing about positive change in your community?”

Police minister Fikile Mbalula says soldiers have not been sent to the Western Cape to tackle gang violence‚ as promised‚ because the police “have ...
News
3 years ago

He said that the community needed to take ownership of the situation in Manenberg‚ and that they needed to participate in community processes.

“At the moment we have a government who is thinking for us‚” he said.

Community activist and Manenberg resident Owen Munroe said that he could not specifically recall the incident “because there have been so many gang fights in between”.

“I have a daughter and she’s 11-years-old‚ and that’s always in the back of my mind. Is my daughter safe? She’s always by my side by her mother’s side‚” he said.

But children are not always innocent victims‚ sometimes they are also the targets as they are recruited as members of warring gangs.

Munroe‚ who also works for the department of community safety‚ said that Lillians Court was well known gang territory.

“They just shoot willy nilly‚ any place‚ any time‚ like they were shooting in Lillian Court. I think they targeted maybe one person and three or four innocent persons were shot‚” he said referring to a separate incident in the same area.

He also commended the detectives and the prosecuting team.

A woman kneels next to a half-naked man lying by a roadside as his wounds ooze blood. After saying a quick prayer she disappears into the crowd of ...
News
4 years ago

Police have disrupted the largest supply yet of firearms to bloodthirsty gangs in the Western Cape. Ironically, the weapons came from the South ...
News
5 years ago

Capturing Manenberg: Love in a time of violence

Photographer Sarah Stacke has been documenting the residents of Manenberg for five years. As her exhibition opens in Cape Town, she tells us about ...
Lifestyle
5 years ago

A controversial gang violence intervention programme will start operating in Manenberg on Wednesday despite criticism by community leaders in the ...
News
5 years ago

Cops keep gangs out of schools

Live ammunition, stolen goods and dagga are among the items Cape Town Metro Police have confiscated from pupils in the past seven months. Thirty-six ...
News
6 years ago