'We're here for the beer': Looting spree after truck loses load in Isando 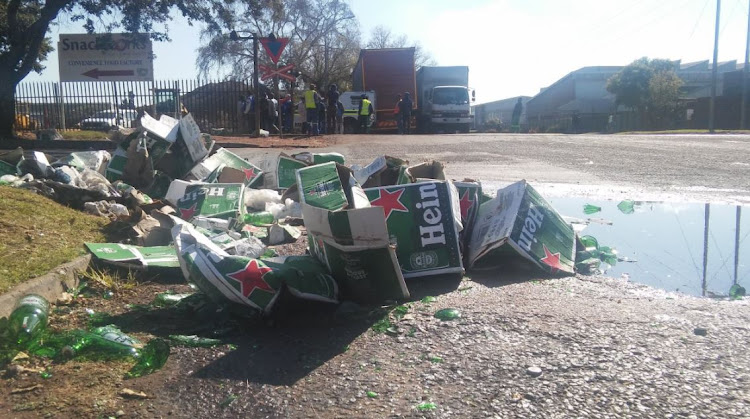 People helped themselves to bottles of beer after a truck lost some of its load in Isando, Ekurhuleni.
Image: Penwell Dlamini

It was a feast of free booze for looters along Industry Road in Isando‚ near Kempton Park in Ekurhuleni‚ on Monday morning after a truck carrying Heineken crates lost parts of its load.

People rushed to grab boxes‚ each containing 12 beer bottles‚ before police and company staff could arrive to stop them.

Second of load of booze falls off the truck in Isando, Ekurhuleni. pic.twitter.com/GScRvMYnrm

When TimesLIVE arrived on the scene‚ the truck was parked on the side of the road and there were still people trying to get their hands on its load. Just two minutes later‚ another portion of the load fell to the side of the road. People rushed forward‚ in the presence of staff trying to fix the problem‚ and stole a few crates of beer.

The news of free booze was already circulating on social media. Two private cars arrived on the scene. Two men dashed out of one of the vehicles to get their hands on the beer‚ but they were seconds too late as a police van arrived just in time to stymie their beer grab.

"We're here for the booze‚ what do you think‚" one of the men remarked.

A witness told TimesLIVE a lot of people had earlier helped themselves to the boxes of beer.

"I think the driver was not able to turn the truck properly and the goods then fell off. People began helping themselves with the free alcohol‚" the man said.