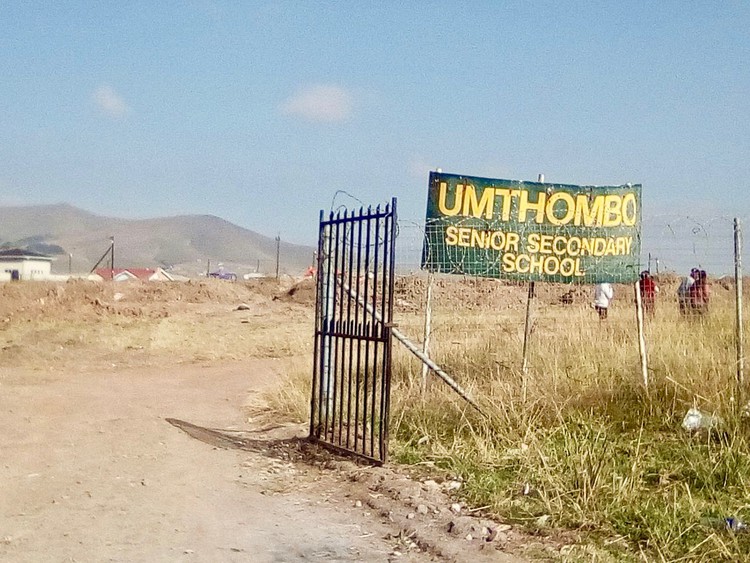 Edward Zuma's R30‚000 fine for hate speech will keep the lights on at a Pietermaritzburg school.

In the wake of violent protests at the Umthombo Senior Secondary School over school fees‚ pupils were excited to learn on Tuesday that the son of former president Jacob Zuma had to hand over cash to their impoverished school.

"We are very happy about it. In fact‚ we are in need of money. The first thing we have to do is pay the electricity bill so our lights are not cut‚" deputy principal Bongani Manyoni told TimesLIVE on Wednesday.

The school owes the local municipality at least R105‚000 for electricity.

"It looks like the whole R30‚000 will go towards our debt. We will also have to use R1‚500 from it to pay Telkom to prevent our phone line from being disconnected‚" Manyoni said.

Protests by learners and parents at Umthombo Senior Secondary School in Mpophomeni, Pietermaritzburg, have entered a third week.
News
2 years ago

About a quarter of the school's 453 pupils have paid the R200 school fee.

"That's why we don't have money. We rely on the subsidy that is given by the department of education and it's very little and it doesn't satisfy our needs‚" Manyoni said.

Less than two weeks ago‚ pupils and their parents embarked on violent protests calling for the school's rank to be lowered to quintile two as they could not afford school fees. The pupils were back in class on Wednesday and "very happy" about Zuma's fine.

"It was actually the pupils who told us about the fine. I don't know how they found out about it on Tuesday but they are happy that some money is coming to us‚" Manyoni said.

On Tuesday Zuma agreed to apologise to the South African public within seven days and pay two schools R30‚000 each for hate speech he made against Derek Hanekom and Pravin Gordhan.

In the letter Zuma described Gordhan and Hanekom as an "anti majoritarian sell-out minority in the ANC who have brazenly and unabashedly spoken out against (President) Zuma on various white monopoly media platforms".

He said Gordhan was one of the most corrupt cadres who‚ as Gandhi‚ "sees black South Africans as low class k…...s" while Hanekom was a "white askari who will do anything to be an obstacle to radical economic transformation and to defend white monopoly privileges."

The conditions of the settlement with the South African Human Rights Commission include that Zuma submit a written apology to the public within seven days of the agreement. The commission will then publish the apology.

The commission had requested that Zuma pay R60‚000 to the Umthombo Secondary School. However‚ his attorney Ayanda Mkhwananzi said the initial agreement was for the money to be paid to Ohlange High School in Inanda.

Magistrate Irfaan Khallil said the Ohlange High School had a significant history and was also impoverished‚ therefore he ruled that Zuma split the R60‚000 between the two schools.

A partnership between the Department of Basic Education and Anglo American South Africa will focus on improving educational outcomes in reading, ...
Features
2 years ago

Private sector commitments may help the education department overcome part of the budget shortfall it faces for upgrading school infrastructure‚ ...
News
2 years ago

When Manuel Govender was appointed the first black principal of Newcastle High 10 years ago, he received several letters from Afrikaans parents ...
News
2 years ago

Bokone Bophirima’s Department of Local Government and Human Settlements has invested over R2.5 million in waste management, in at least 10 of its ...
Features
2 years ago

Education is the single greatest obstacle to socio-economic advancement in South Africa‚ according to the Fast Facts report from the Centre for Risk ...
News
2 years ago
Next Article