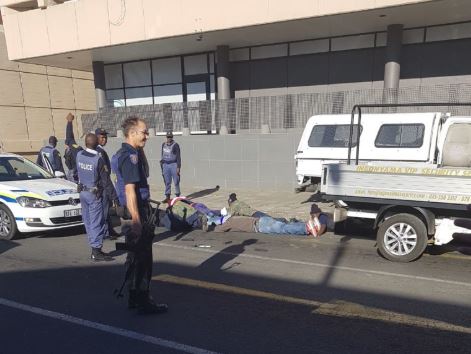 The eight guards‚ whom the police say were hired by the association‚ were arrested in the Brakpan CBD after the fatal shooting of four taxi drivers and injuries to eight others.
Image: East Rand Traffic via Twitter

Six of the eight men arrested on Wednesday over a deadly taxi-related shooting in Brakpan are security officers contracted to Ingonyama VIP Security in KwaZulu-Natal.

This was revealed on Thursday by the Private Security Industry Regulatory Authority (PSIRA)‚ which said these officers were registered with the authority.

The eight guards‚ whom the police say were hired by the association‚ were arrested in the Brakpan CBD after the fatal shooting of four taxi drivers. Eight others were injured. Police also seized 10 firearms during the arrest. PSIRA CEO Manabela Chauke said the guards’ competency to carry a firearm was to be confirmed by police.

He denounced the brutal shooting and applauded the police for responding swiftly to the incident. He also pledged PSIRA's full commitment to work with relevant law enforcement agencies to ensure a meticulous investigation‚ so that all those who were implicated in the shooting would face the full might of the law.

Chauke said the recent increase in brutal violence involving private security service providers was of great concern. “Our investigation team has begun investigating this incident in order to deal authoritatively with the security company and the security officers involved. We will get to the bottom of this act of lawlessness and bring those involved to book‚” Chauke said.

The law that governs the private security industry makes provision for a disciplinary process‚ including the suspension and withdrawal of the registration of security officers who may be found guilty of misconduct.

Ingonyama‚ on its website‚ lists Metrorail‚ the Department of Social Development and Mtubatuba Municipality as some of its clients. Ingonyama has not been available to comment.

The Tsakane taxi rank was shut down on Wednesday night by Gauteng transport MEC Ismail Vadi.

“No taxis will be allowed to operate from the Tsakane taxi rank and law enforcement personnel will be deployed to the affected area‚” Vadi said.

He said the taxi rank would remain closed until the security situation relating to the taxi industry in the area stabilises.

Commuters in the Tsakane and Brakpan areas were urged to make alternative transport arrangements.

“This drastic administrative measure is necessary to protect the lives of commuters and taxi drivers. It’s in the interest of public safety‚” Vadi said.