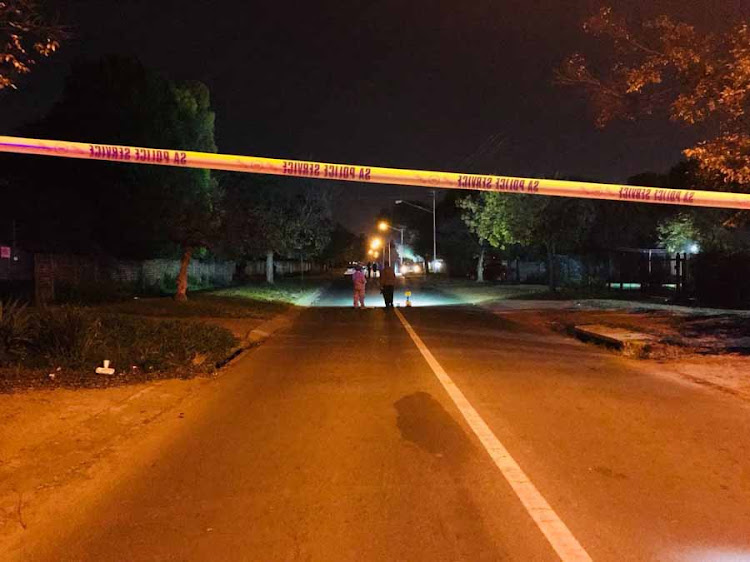 Police forensic officers search for clues at the scene where police raided the hideout of suspected cash-in-transit robbers.
Image: Supplied

The Hawks insist that officers only shot suspects in Thursday night’s raid on a suspected cash-in-transit gang’s Pretoria hideout.

Heavily armed Special Task Force and National Intervention Unit members along with crime intelligence agents and investigators‚ who are part of a national anti-cash heist team‚ stormed the Queenswood house late on Thursday.

Police said officers had been trailing two vehicles throughout the day when they saw them approach the alleged hideout.

“These were the suspects that were moving the vehicles for a heist planned in the area. The vehicles were to be used in the heist and as get-away cars. It was a tactical decision‚” said Gauteng Hawks head‚ Major-General Prince Mokotedi.

He said the men were part of a larger group who were to be involved in the heist.

“We had to act then‚ although the group who had the weapons were not around.”

Police officers tracking a gang of cash-in-transit robbers have killed a Pretoria homeowner and apparently critically injured his family after they ...
News
4 years ago

He said when officers approached the house‚ the suspects drove off in the vehicles in different directions.

“They were then engaged. Some were shot. Three were arrested. There were civilians hurt but not by us. They were injured by the suspects trying to escape. All those that were shot were suspects.”

Asked if weapons or equipment used in the commission of the heists were recovered‚ Mokotedi said no. He said the investigation was still very fluid.

“These are not your normal street tsotsis. They are incredibly dangerous.”

Asked about civilians who had been killed in the arrest‚ Mokotedi said as far as they were aware no one had died.

“Those that we engaged were only injured.”

Responding to allegations that the wrong house may have been raided‚ he said that the house they were looking for was on a property with multiple houses.

“The suspects that we were looking for‚ who are middle class citizens‚ were friends with a young man living in one of the houses. The other house was occupied by his parents‚” he told TimesLIVE from the scene on Thursday night. “We were not after the parents of the young man or the young man‚ but the young man’s friend and crew who we heard were using the house as a safe house.”

On civilians who were shot‚ he said a woman was injured as a result of police chasing the suspects. He declined to say what injuries she sustained. Police on the scene told TimesLIVE the episode had been chaotic.

“Instead of waiting for those with the guns to arrive‚ you got people driving cars which are not stolen‚” an officer said.

“Officers stormed the wrong house‚ smashed down walls and came up with zilch.”

A policeman dismissed claims that police did not shoot civilians.

“There was an elderly woman seriously injured. A jogger running past was caught up in this. This was proper cowboy stuff. Someone decided to open fire when there was no immediate active threat‚” he said.

Cash-in-transit security officers will embark on nationwide protests on June 11 to demand that concrete measures be taken to deal with the increasing ...
News
4 years ago

Another officer who assisted paramedics treat the wounded said one woman‚ a civilian‚ was seriously wounded.

“The paramedics didn’t rate their chances. Among the injured was a police officer who came out to help his neighbour when the cops stormed the property and opened fire.”

Willie Lightfoot of Lifemed Ambulance Service said that they had treated a critically injured man on the scene.

“The scene was chaotic. There were patients everywhere‚ with heavily armed police on the scene. “We got there and went straight to help the patients. The patient we treated was in a bad way.”

Lifemed’s advanced life support paramedic Michael Kok said they found five people who had been shot‚ including a woman who was seriously injured.

“The police didn’t want us to do a lot on the scene in terms of getting to patients. They wouldn’t allow us to go to different patients.

“We were only allowed to stay with our patient‚ who was shot through both legs and in the stomach.”

He said while on the scene the police had been chasing after other alleged suspects.

“There was still a hell of a lot of shooting. They were shooting at people who had run to a nearby school field.”

Kok said under normal circumstances paramedics would be allowed to quickly take patients to hospital.

“By the time all the paramedics were able to leave‚ including those treating the woman‚ it was two hours later. When we got our patient to hospital he was crashing. The doctors took him straight into emergency surgery. I don’t know if he made it. He was in bad shape.”

He said the police had been extremely secretive about the scene.

“In my career [I’ve] never come across something like this.”