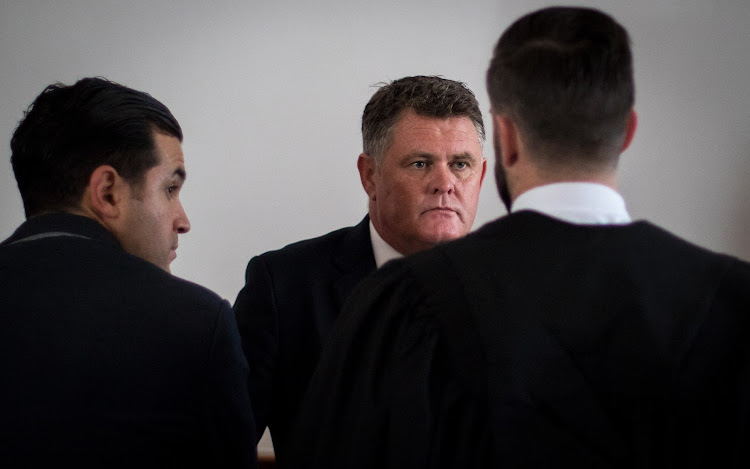 “When you’re an adulterer‚ you hide and you are deceitful,” murder accused real estate CEO Jason Rohde described his “double life” of maintaining an affair and lying to all those he loved.

On Monday he revealed his life of infidelity to the Cape Town High Court which he said eventually pushed his wife Susan over the edge‚ leading to her committing suicide at the Spier wine estate in Stellenbosch in 2016.

The state however maintains that he murdered her by strangling her to death‚ relying on a strong post-mortem report describing manual strangulation along with severe bruising which suggests she suffered from “battered wife syndrome” leading up to her death.

She also swallowed large quantities of blood in her last hours alive which were caused by blunt force trauma on the right side of her chest.

Murder accused millionaire Jason Rohde’s extra-marital affair with one of his staff members has popped up yet again in his trial.
News
4 years ago

The post-mortem clearly found that she had been strangled‚ not hanged‚ presumably with a hair ironing chord‚ to make it seem as though she had hung herself.

Susan was found by Rohde in their Spier hotel bathroom with a hair ironing chord loose around her neck and around a towel hook behind the bathroom door. The state is also accusing Rohde of obstructing the administration of justice.

On Monday however‚ Rohde started narrating a series of events‚ describing his double life filled with lies and the “selfish” pursuit of an affair that would lead in one way or another to the disintegration of a family‚ with the eventual death of his wife and mother of three children.

The room number of the suite at the Western Cape hotel in which property mogul Jason Rohde’s wife took her last breath has been changed.
News
4 years ago

Rohde said that after Susan had found out he was having an affair with Jolene Alterksye‚ an employee of Lew Geffen Sotheby’s International Realty‚ of which company he was the CEO‚ he had promised to end it. But four weeks later‚ he had decided to rekindle it.

He said that Susan had stopped sleeping after she found out about the affair and that the situation in their home was “tense” and “fraught”.

“I moved downstairs to the downstairs bedroom. In fact I moved out of the house for five days. I moved into an apartment block called Sandton View. Susan asked me to come back‚” he said.

“It was just‚ Susan just‚ she couldn’t... If I was sleeping she would wake me up every two hours asking me questions‚” said Rohde adding that he started becoming distant and falling out of love.

He said that she had become “very emotional” and fluctuated between anger and sadness and she started obsessing about the affair‚ and not without merit.

“The net result of that was not only was I lying to Susan‚ but I was also lying to the marriage counsellor - telling her that I’ve broken off the relationship with Ms Alterskye when in fact that wasn’t correct‚” said Rohde.

“I had visited her a couple of weeks after I was caught in February and I had seen her in Cape Town‚ and I’m sure that we were exchanging Whatsapp’s and smses. We were communicating with each other‚” he said.

“When you’re an adulterer you live a double life. You hide things‚ and you duck and you dive‚ and you just... You just hide. And you’re just deceitful.”

Murder accused Jason Rohde’s lawyers were adamant on Thursday that the state’s key witness had been coached and even obtained footage of him having ...
News
4 years ago

Rohde said that he felt like a fraud and he was “completely selfish”.

“I didn’t want to disrupt my family life for the sake of my children and destroy their little lives‚ but on the other hand I didn’t want to let Jolene go either‚” he said.

But Susan was not convinced by Rohde’s act and she had suggested that he see a psychologist to deal with his dishonesty‚ but had he lied to her as well‚ never revealing that he was still having an affair.

Meanwhile Rohde claimed that Susan had started keeping a diary in which she meticulously jotted down notes of his affair with Alterskye.

“After she caught me‚ she went back into my phone diary and into my work diary to look at all the flights that I had taken to Cape Town. Then she would say you were in Cape Town on that particular day‚ where did you meet Jolene? Which hotel did you stay at? What restaurant did you go to? What food did you eat? What food did Jolene eat‚” he said‚ adding that he could never find the diary after Susan’s death.

But the tension between the couple got even worse when Susan insisted on going along to the Lew Geffen Sotheby’s International Realty conference at the Spier estate in June 2016.

Rohde said he thought she wanted to see whether he was still having an affair.

He and Susan “bickered” constantly throughout the trip and tension continued to mount culminating on the night before she died with the two having a protracted verbal argument with a series of skirmishes in between the evening’s festivities at the formal event and prize-giving attended by about 150 guests.

After the event all the guests returned to their rooms except for a few who invited the Rohdes to an after-party‚ but Susan refused their invitation.

“I was very annoyed that she said we weren’t going to this after-party but I let it go. There was enough tension and animosity between us‚ I didn’t want to create an even bigger fight. We went to the room‚ constantly arguing back and forth. We were both rude to each other‚” he said.

Murder accused millionaire Jason Rohde’s trial finally resumed on Tuesday after weeks of drama which saw him trim his legal team after being thrown ...
News
4 years ago

He said that while he and Susan were arguing he walked to the bathroom and tried to send Jolene a message but he was caught out by Susan who became “apoplectic” with rage.

“I wanted to get out of the room‚ and when we get back to Joburg I wanted to sit down with Susan and work out how we can plan our lives going forward and get divorced and still have our family. We can still love our family but we can do that as many divorced people in this world‚” he said.

“I moved towards the door to get out the door. And Susan - she’s done this on many occasions in our marriage - she would block me from the door. Often if we had an argument in the bedroom‚ because we would always try to argue away from our children‚ and when I’d had enough I’d always want to leave and Susan stood in front of the door and prevented me from leaving‚” said Rohde.

The case was postponed to Tuesday when Rohde is expected to complete his testimony.