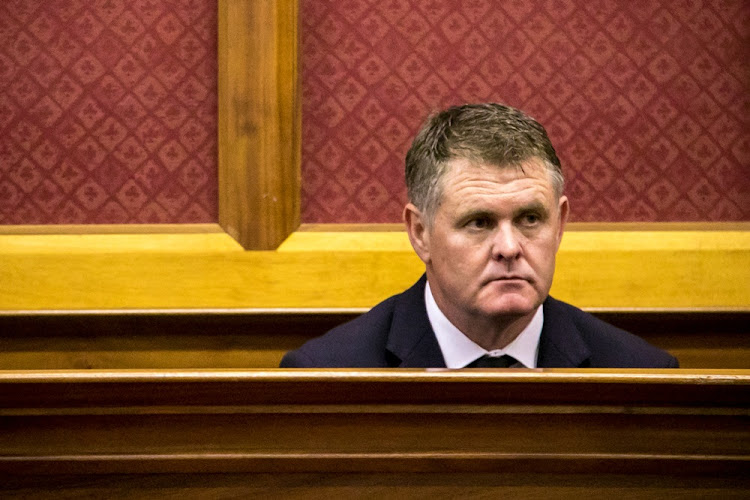 Murder accused Jason Rohde still dreams about the woman he is accused of killing.

In an emotional statement towards the end of his evidence in his murder trial on Wednesday‚ Rohde said he had recently dreamt of his wife Susan.

"The other night I dreamt that she was standing next to me holding my hand. There's a lady in the gallery now who reminds me of Susan‚" he told Judge Gayaat Salie-Hlophe.

Rohde was responding to a request by his advocate‚ Graham van der Spuy‚ about whether there was anything he would like to say to the court.

After pausing‚ Rohde said: "I'm guilty‚ as I've said before‚ of being an adulterer.

"In doing so‚ I destroyed the lives of my three children‚ Susan's mom and dad‚ her brother‚ her sister‚ their children‚ and I take full responsibility. I have to live with the shame of that for the rest of my life.

"When I look at my children today‚ I know I'm guilty of driving their mom to the point of her taking her life. But I didn't kill their mom or inflict death on their mom in a physical sense.

Jason Rohde testified in his murder trial in the Cape Town High Court. Rohde is accused of murdering his wife Susan in 2016 and then attempting to make it look like a suicide. Rohde says his wife took her own life after she learned of his affair with a work colleague.

"I already have a life sentence... I can never get rid of that shame and guilt‚ and every time I look at my kids I'm reminded of that. It makes me sick to my stomach.

"I'm so ashamed of what I did that I don't know if you can understand when I say this‚ and it might come out the wrong way‚ but it's felt like I haven't been able to even grieve Susan.

"From 24 ‚ 48 hours after the 24th (of July in 2016‚ when Susan's body was found in the bathroom of the couple's hotel suite at Spier in Stellenbosch)‚ I've just been fighting for my life.

"It's like I haven't had a chance to literally grieve about Susan. I think about her often."

Earlier‚ Rohde said bruises on Susan’s legs were caused when she was doing a handstand and fell onto dumbbells in the bedroom of the couple’s home in Bryanston‚ Johannesburg.

Questioned by Van der Spuy‚ Rohde said his wife was in the habit of doing handstands against the wall in their bedroom‚ where there was an exercise mat.

He saw the bruises about a week before Susan was found dead at Spier. She was applying arnica cream to them.

“When you’re an adulterer‚ you hide and you are deceitful,” murder accused real estate CEO Jason Rohde described his “double life” of maintaining an ...
News
4 years ago

The bathroom door that concealed Susan Rohde’s body could have been locked or unlocked using a teaspoon or a coin. But murder accused estate agency ...
News
4 years ago

Van der Spuy went on to ask Rohde‚ the former CEO of Lew Geffen International Realty Franchises‚ about a telephone conversation after Susan’s death with her brother‚ Mark Holmes.

“I had phoned Mark‚ I was very emotional‚ I was very upset‚ and I said to Mark that I had killed Susan. My actions had led to Susan taking her own life‚” said Rohde.

Rohde: “I don’t recall using those words but I might have done. I have said from the very first day that I am wholly responsible for Susan taking her own life through my misconduct‚ through my adultery.”

Rohde has admitted having an affair with Cape Town estate agent Jolene Alterskye. On Wednesday‚ he confirmed that the “interaction side” of the affair started in June 2015‚ but “not the physical side”.

Van der Spuy then question Rohde in detail about the state’s indictment‚ which outlines how Rohde allegedly murdered his wife during a company conference then attempted to cover up what he had done.

Asked about numerous specific allegations‚ Rohde repeatedly replied: “There is no truth in that whatsoever.” At one point‚ he added: “It’s illogical. It doesn’t make sense‚ to the point of being absurd.”

Murder accused millionaire Jason Rohde’s extra-marital affair with one of his staff members has popped up yet again in his trial.
News
4 years ago

The room number of the suite at the Western Cape hotel in which property mogul Jason Rohde’s wife took her last breath has been changed.
News
4 years ago

Murder accused Jason Rohde’s lawyers were adamant on Thursday that the state’s key witness had been coached and even obtained footage of him having ...
News
4 years ago