Drought every 10 years: Cape water woes far from over 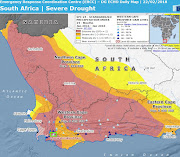 The Western Cape could face a drought every 10 years, say European Commission experts.

Scientists from the organisation’s Joint Research Centre, who analysed data from its Global Drought Observatory, looked at rainfall in Southern Africa over the past 36 years and found a strong probability of a 50% to 70% monthly deficit every five years.

This means more moisture is lost through evaporation and transpiration than is gained through rainfall.

A new technical report from the Joint Research Centre says the current water shortage – due to low rainfall for three successive winters – while exceptional, is characteristic of longer-term weather patterns.