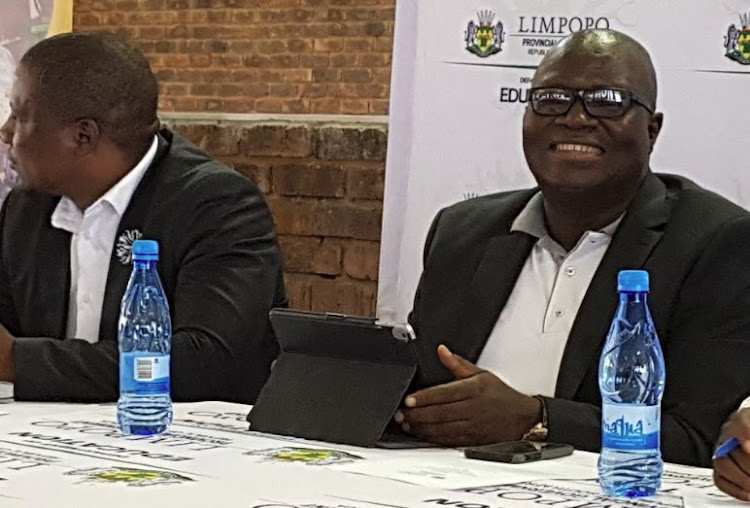 Education department spokesman Sam Makondo said the department had repeatedly tried to shut down the school‚ which has 109 pupils.
Image: Sam Makondo via Twitter

The Limpopo Education Department has refuted claims that it has neglected pupils at a high school in the province who are being taught under trees because their dilapidated classrooms are unsafe.

Section27‚ a public interest law centre‚ said pupils have been taught under trees at Makangwane Secondary School in Non Parella since part of the corrugated-iron roof was ripped off during a storm late in January.

Education department spokesman Sam Makondo said the department had repeatedly tried to shut down the school‚ which has 109 pupils. Department policies say a school needs a minimum of 200 learners to be functional.

“The school is a small school. It cannot exist on its own‚” said Makondo.

“Parents at the school do not want to be moved to a new school. They are denying that the school be closed even though we have provided an alternative.” Makondo alleged that each time they moved the children to neighbouring schools with extra classrooms‚ the parents fetched the children.

Learning under a tree: Government slammed for not providing safe classrooms

The department of education is facing legal action for allegedly failing to provide safe and adequate school infrastructure for pupils who have been ...
News
3 years ago

“They are forcing the hands of the department [into renovating and keeping the school open] ... But the school cannot be renovated‚” he said.

Section27 had raised a red flag earlier in the week about the dire conditions at the school. In a video compiled by the centre‚ one Grade 12 learner from the school said pupils had done little work by the end of the first term.

“Earlier this year when applying at university‚ they asked for my March 2018 results‚ but I gave them my 2016 report because we didn’t do any work in March‚” she said.

She said that pupils spent their time sitting outside under trees because the classrooms were falling apart. At one point‚ a snake was found slithering in a dilapidated classroom.

More police deployed after another school building torched in Limpopo

Additional members of the police Public Order division (POP) have been deployed in the Zaaiplaas area outside Groblersdal in Limpopo after the ...
News
3 years ago

Section27 is pursuing legal action against the department‚ accusing it of failing to provide safe and adequate school infrastructure for pupils at the school. It argues that the dilapidated building poses a threat to the safety of pupils‚ with support beams having previously fallen down in class. The school governing body (SGB) decided that it was safer to teach pupils outdoors.

“This incident occurred after more than a decade of correspondence to the department about the state of the school buildings and the danger it poses‚” said the centre.

A former principal alerted the department to the poor state of the school in a letter in 2006. The centre was asked to intervene on behalf of the SGB and served papers on the department indicating that it was going to court to obtain an interdict to ensure that temporary classrooms were provided along with desks and chairs and that a fully-funded catch-up plan for pupils was in place.

A partnership between the Department of Basic Education and Anglo American South Africa will focus on improving educational outcomes in reading, ...
Features
3 years ago

Teachers at the frontline of a battle with hostile pupils