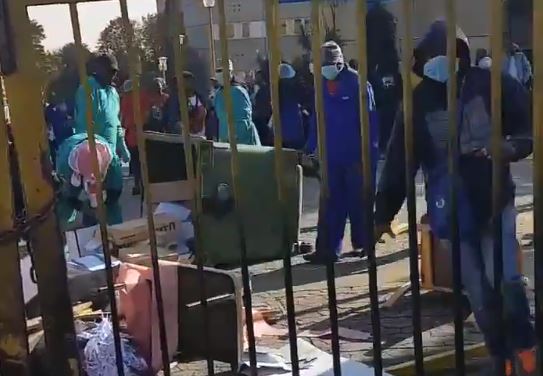 It was not immediately clear what had sparked the protest and who was protesting.
Image: Gary Fynn via Twitter

Protesting workers trashed the Charlotte Maxeke Academic Hospital in Johannesburg on Thursday in a dispute over unpaid bonuses.

Black bags containing rubbish ranging from paper to half-eaten food were emptied along the corridors‚ contaminating what is meant to be a hygienic environment.

Some patients were wheeled through the piles of rubbish by some of the non-striking workers. Others‚ with patches covering their eyes‚ were seen walking through the soiled corridors.

A few of the demonstrators wore blue face masks to protect themselves from the unsanitary conditions.

A revolving door had been blocked from the inside with a heap of metallic chairs.

Outside the hospital‚ arriving patients – including pregnant women and some patients in wheelchairs – left the facility without seeking treatment. "There's nothing I can do. I will come back next week‚" said one lady as she boarded a taxi.

Earlier‚ the gates to the facility were locked in an attempt to contain the demonstrators.

Debris of rocks and tree stumps‚ paper and food also lined the road leading to the hospital. A small fire‚ which was dying out‚ released smoke into the air.

A hospital source‚ who asked not to be named‚ told TimesLIVE: “We presume it is related to performance evaluations which [used to] lead to the awarding of bonuses. But now‚ there is no money for bonuses.”

"There is no harm to the patients inside‚" the source said‚ adding that they had medics who were attending to them.

Department of health spokesperson Lesemang Matuka referred all questions to the facility's CEO‚ Gladys Bogoshi. She was‚ however‚ said to be in an emergency meeting with the police on how to best handle the situation.

Some people have taken to social media to post videos of what is happening on scene.

Strike at Charlotte Maxeke Hospital and there is no operation pic.twitter.com/RJLeirGhLt

In April‚ medical waste and rubbish were also scattered all over the hospital’s floors by workers‚ including nurses and support staff such as cleaners and porters. At the time‚ their union told TimesLIVE they were dissatisfied with the hospital’s non-payment of performance bonuses.

“Their grievance is the non-payment of their performance bonuses‚ which affects all Gauteng health departments‚ not just Charlotte Maxeke. They have not been paid these bonuses for the last two financial years‚” Mvumvu was quoted as saying.

The provincial health department had been approached to resolve the matter‚ according to the report.

Workers at Charlotte Maxeke hospital in Johannesburg protested on May 31 2018 over unpaid overtime and other labour issues.

Striking members of the National Education‚ Health and Allied Workers' Union (Nehawu) at the Charlotte Maxeke Hospital in Johannesburg have strewn ...
News
3 years ago

Cancer patients have been subjected to longer waiting times at the Charlotte Maxeke Hospital in Johannesburg‚ a provincial MP has revealed.
News
3 years ago

Protesters blockaded the entrance of the Steve Biko Academic Hospital in Pretoria with burning tyres on Wednesday‚ the same day that strikers ...
News
3 years ago