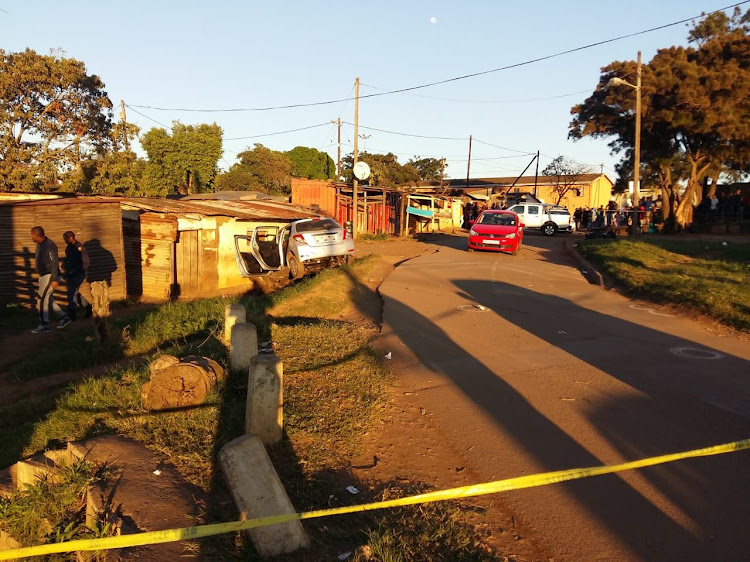 The scene at the KwaMashu men’s hostel where police shot and killed two men allegedly linked to the murder of Kelly Chetty during a botched hijacking on May 31 2018.
Image: South African Police Service

A third man thought to have had a hand in the murder of Kelly Chetty during a botched hijacking was arrested at a Durban clinic on Friday.

Two others‚ alleged to be his accomplices‚ were gunned down by police in KwaMashu A Section shortly before dawn.

Police spokesman Brigadier Jay Naicker said officers had traced the suspected hijacker to the clinic where he had sought treatment for gunshot wounds.

He was transported to hospital under police guard.

“He will appear in court at some point when he is well enough‚” Naicker said.

Chetty had been in his car with his children when he was accosted by gunmen who shot in him the chest before leaving his vehicle and hijacking another.

Marshall Security spokesman Kyle van Reenen said medics had rushed to the scene and found a bloodied Chetty still in his car. It was thought that he had stopped to buy fruit from a roadside shop when he was attacked and shot in the chest.

“Reports indicate that the man was travelling with his daughter and son in the family vehicle when suspects attempted to hijack another motorist before setting their sights on the victim's Volkswagen‚” Van Reenen said.

“An armed suspect fired a shot from the front passenger side of the vehicle‚ striking the victim. The children‚ although severely traumatised‚ were not harmed in the incident.”

Police have shot and killed two men thought to be linked to a botched hijacking that claimed the life of Kelly Chetty in Avoca in Durban on Thursday ...
News
3 years ago