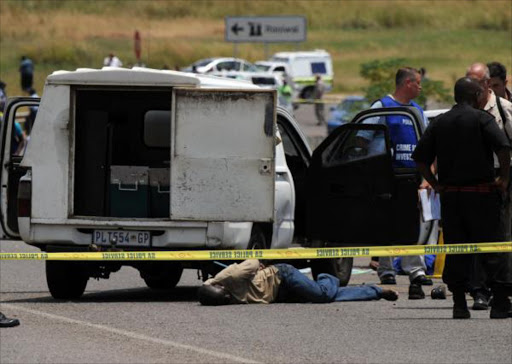 A suspect, under heavy police guard, lies on the road after a foiled cash-in-transit heist. File photo.
Image: SUPPLIED

This year there has been a cash-in-transit heist every day, on average, and it's time to take the war to the criminals, says Police Minister Bheki Cele.

The rate of heists so far this year has tripled since last year, and Cele says his new commanders at the Hawks and crime intelligence will lead the fightback.

"[Those units] have been completely ineffective, spending more time defending themselves and living in court," he said.

Among his plans are the re-equipping and revitalisation of specialised units. "No one will be in the barracks, they will be back on the roads," Cele told the Sunday Times this week.

"Units like the special task force, which were primary in dealing with the attacks that occurred several years ago, suddenly stopped. Fortunately they are back. The police have a renewed sense of urgency which is leading to more arrests," he said.

Cash-transport companies are spending heavily on helicopters, heavily armed response teams and new technology as they face a barrage in which 43 trucks have been blown up and nine people have died.