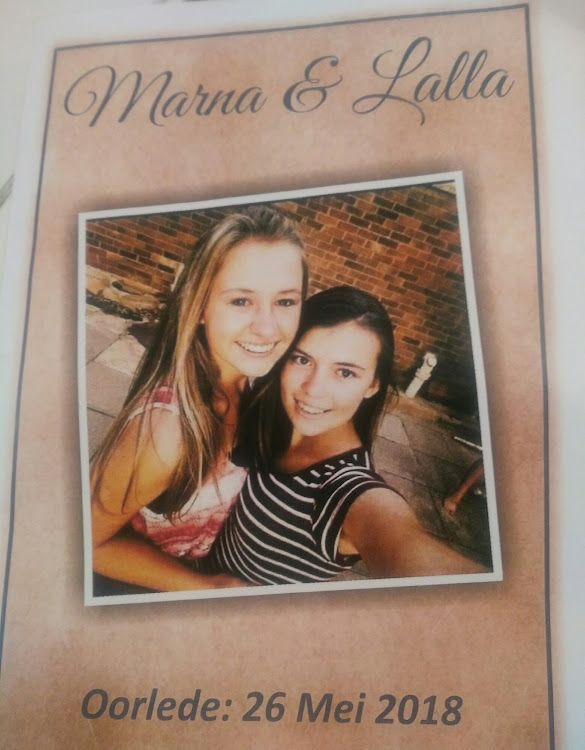 A picture of the funeral programme of Marna Engelbrecht and Sharnelle (Lalla) Hough
Image: Katharine Child

“Suddenly and without a goodbye‚ our beloved Lalla and Marna‚ you were taken away from us‚ in the prime of your lives. No one who doesn’t know you can understand what it means that you left without a goodbye."

These are the words‚ translated from Afrikaans‚ that were on the funeral programme of Sharnelle‚ (Lalla) Hough‚ 17‚ and Marna Engelbrecht‚ 16. The two best friends were allegedly strangled to death by confessed killer Xander Bylsma in the early hours of Saturday morning a week ago.

They were sleeping at the hostel at Stella Hoërskool‚ 50 kilometres from Vryburg in North West.

Bylsma is a 19-year-old who had been dating Hough for more than a year until she broke up with him recently.

The funeral‚ held on Friday at a Dutch Reformed church in Vryburg North‚ was attended by hundreds of people.

The pair – best friends - were remembered at a joint funeral as they were inseparable‚ sharing a hostel room‚ drinking milkshakes at Spur in Vryburg and in the same class. Bylsma‚ who matriculated last year‚ had also attended the same school and stayed in the hostel.

A 19-year-old man has appeared in the Vryburg Magistrate’s Court in connection with the murder of two girls at the Stella High School hostel in the ...
News
3 years ago

A man is expected to appear in court on Monday in connection with the shocking murders of two teenage girls at a school hostel in the North West over ...
News
4 years ago

Lallapansie and Marna Muisie (mouse) were their nicknames as revealed in messages written to them in a tribute pamphlet titled Legendes (legends). Sharnelle Hough’s dad‚ Ronnie‚ wrote a tribute in Afrikaans. Translated it reads: "Lallapansie is dad’s sunbeam and reason for living. Your laughter and playfulness has always made the sun rise and moon shine brightly. Your laugh is quiet now but it echoes in my thoughts. I can’t say goodbye but‚ till we meet again‚ keep a place for papa there above."

Lalla's mother Sonja wrote a long message to her daughter saying that she had gone to better place and that she wouldn’t be lonely in heaven as she had Marna with her.

She was going to really miss their Sunday phone conversations‚ wrote Sonja Hough.

Marna's mother wrote that she could still hear her daughter saying "Moeder" [mother].

On Thursday‚ according to staff at the Wimpy in Vryburg‚ Xander Bylsma sat alone at his usual seat at the window that faced the street. Two days later he was arrested and in custody. He has been remanded until his next court appearance in August.

“I know the town wants him dead but I love Xander‚” said someone close to him this week.

“Suddenly and without a goodbye‚ our beloved Lalla and Marna‚ you were taken away from us‚ in the prime of your lives. No one who doesn’t know you ...
News
3 years ago