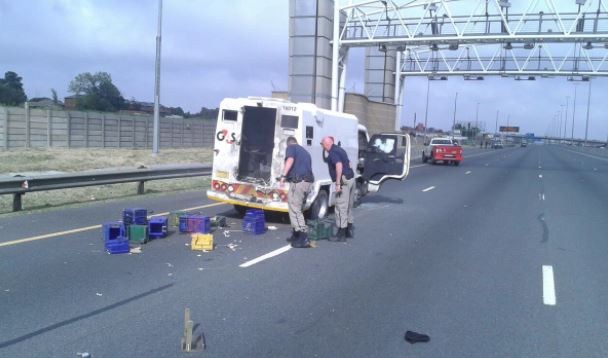 Easy access to explosives and corruption in the police system are some of the reasons for a dramatic increase in cash-in-transit heists‚ a study has found.

Dr Mahlogonolo Thobane‚ who focuses on criminology‚ found that due to a lack of control in the mining sector‚ robbers find it easy to access explosives for heists.

“The ramification of armed robberies is currently costing the banking and cash-in-transit industries vast amounts of money‚ not only in cash being stolen‚ but also due to money being spent on fighting this crime. The expenditure of these industries on target hardening and surveillance measures is radically increasing as perpetrators become more professional and sophisticated‚” Thobane found.

The 2014 study is titled “The criminal career of armed robbers with specific reference to cash-in-transit robberies”.

On Wednesday the Seshego Regional Court in Limpopo jailed mine workers for dealing in explosives.

Captain Matimba Maluleke from the Hawks told TimesLIVE that they could not rule out a possibility of there being a link between the dealers and the rise in cash-in-transit heists since the crime was often operated by syndicates.

“The sentencing comes at the time when the province and the country are experiencing an upsurge in cash-in-transit heists and commercial explosives are reportedly being used in a commission of these serious crimes.”

Maluleke said it was hoped that the sentences would send a strong message that joint police efforts were yielding excellent results in ensuring that those are involved in the illegal supply of explosives went to jail for a very long time.

This year there has been a cash-in-transit heist every day, on average, and it's time to take the war to the criminals, says Police Minister Bheki ...
News
4 years ago

A 26-year-old woman was among those arrested for a cash-in-transit heist in Polokwane this week‚ the Hawks said on Wednesday.
News
4 years ago

The Hawks have arrested seven suspects in connection with a cash heist that took place in Limpopo on Monday morning.
News
4 years ago