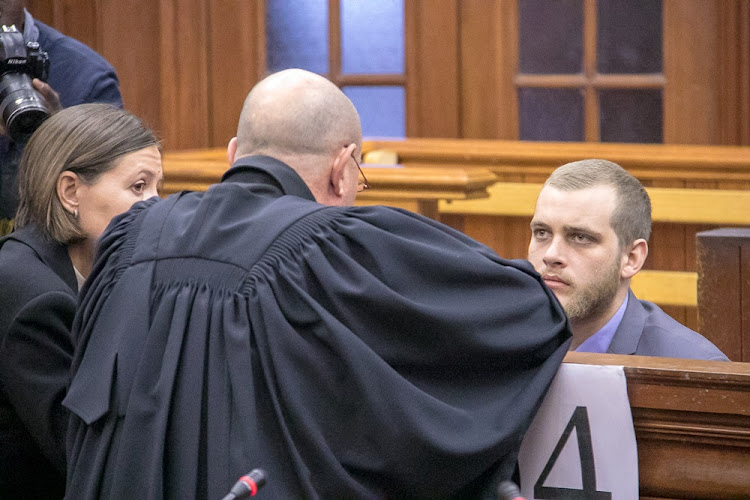 Henri van Breda talks to his legal counsel in the Cape Town High Court during his sentencing hearing on June 5 2018.
Image: Anthony Molyneaux

The state pulled no punches in its assertion that Henri van Breda‚ convicted of hacking his parents and brother to death and attempting to murder his sister in the same way‚ should not be cut any slack in the sentence he receives.

Susan Galloway‚ presenting her heads of argument in the High Court in Cape Town on Tuesday‚ said: “The accused was part of a close-knit‚ loving family who played board games‚ went on vacation and regularly spent time together.”

The family had “no financial problems”‚ she said‚ “and thus all had a bright future ahead of them”.

She then took those present in the court room back to 12 Goske Street‚ at the De Zalze estate in Stellenbosch on the morning of January 27‚ 2015‚ painting a picture of the vulnerability of the victims and the shock they must have felt when they looked into the eyes of their attacker and saw their son and brother.

“The deceased and the remaining victim were most viciously attacked in their own home by someone they trusted and loved‚” said Galloway‚ adding that Van Breda carried out the attack at a time when his family were “most vulnerable‚ that being‚ after they had gone to bed”.

Van Breda doesn't even try to argue for a lighter sentence

To argue for a lighter sentence than the minimum of life in prison would be to admit to the heinous crimes.
News
3 years ago

Why did Henri van Breda hack his parents and brother to death with an axe and leave his sister bleeding for hours on the morning of January 27‚ 2015? ...
Ideas
3 years ago

At this point‚ it was hard for anyone who had sat through the trial not to recall the heartbreaking image of Henri's older brother Rudi lying asleep in the room they shared‚ and suddenly having an axe bearing down on him.

She added that the victims were “particularly defenseless” given how lethal an axe is‚ and that Van Breda’s lengthy call to emergency services when his sister‚ Marli‚ was still fighting for her life was “indicative of the cold-bloodedness of his actions”.

The state concluded‚ therefore‚ that “the seriousness of the crimes and the interests of society outweigh the personal circumstances of the accused by far‚ and there are no substantial and compelling circumstances justifying a deviation from the prescribed sentences”.

The first day of sentencing on Tuesday played out to a courtroom that was as tightly packed as it was on May 21‚ when Van Breda was convicted of the murders.

The killer appeared to be awake and alert — unlike during the judgment‚ when he could be seen falling asleep every minute or so‚ raising concern that he was heavily sedated.

It was also confirmed in court on Tuesday that Van Breda had been “attacked” on his way to the hospital section of Pollsmoor Prison‚ in Tokai‚ when an inmate stamped on his foot‚ leaving him with a bruise.

Judge Siraj Desai said it was “unfortunate” that the international media had blown the situation out of proportion‚ reporting that Van Breda had sustained serious injuries and had even tried to commit suicide.

“It is very clear‚” said his defence counsel Piet Botha‚ “that he did not commit suicide. I would also like to state on record that he also did not even attempt to commit suicide.”

Sentencing is expected to conclude on Thursday.