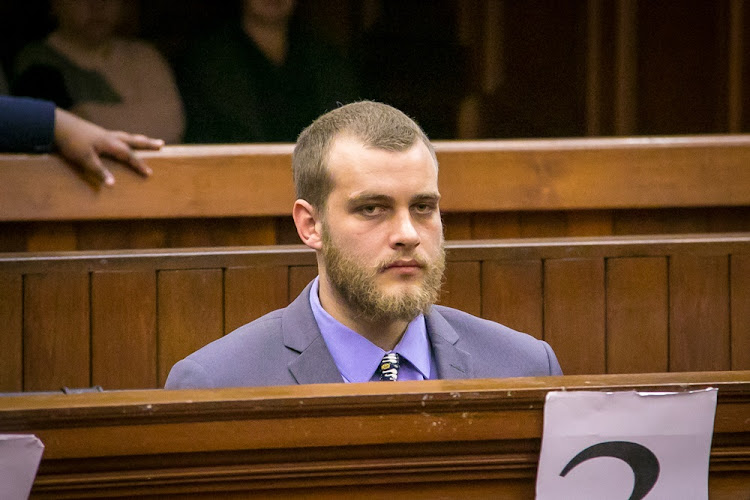 Henri van Breda appears in the Cape Town High Court on June 7 2018 for sentencing after he was found guilty of the murders of his mother, brother and father and attempted murder of his sister.
Image: Anthony Molyneaux

Henri van Breda is a cold-blooded‚ savage and cruel killer who must spend the rest of his life behind bars‚ Judge Siraj Desai said on Thursday.

Sentencing the 23-year-old to three life terms for the murders of his parents‚ Martin and Teresa‚ and elder brother Rudi‚ Desai told the High Court in Cape Town that Van Breda had offered no explanation for his crimes.

He sentenced Van Breda to 15 years in prison for the attempted murder of his sister‚ Marli‚ and 12 months for obstructing the ends of justice by attempting to cover up his crimes.

Van Breda’s defence counsel‚ Piet Botha‚ immediately informed Desai of his intention to apply for leave to appeal against both convictions and sentences. The application will be heard on June 27.

As we awaited Desai’s arrival‚ Van Breda — bearded and dressed in a light grey suit — repeatedly turned round and smiled at girlfriend Danielle van Rensburg‚ who was seated at the back of the packed court.

After sentencing‚ he was led out of court in handcuffs by police officers. He showed no emotion as Desai read out his sentencing remarks.

The judge said Van Breda had a bright future when he attacked his family at their home in De Zalze‚ Stellenbosch‚ in January 2015.

“Your future was not bleak‚ in fact it was bright. You had a supportive family‚ and they had the means to assist you in your future endeavours‚” he said.

“You have not told the court what precipitated these events that night. We know from an independent witness that there was an argument‚ a loud one‚ which persisted in your house for several hours.

“At best for you‚ we can assume that the crimes were not committed in a vacuum but were the product of some disgruntlement in the family.”

The axe triple murder case that rocked South Africa has come to a close. Henri van Breda was convicted and sentenced to three life terms behind bars plus and additional 15 years for attempted murder and 12 months for obstructing the ends of justice on Thursday June 7 2018. Van Breda's defense team have applied for leave to appeal the conviction and sentence.

But he said the attacks involved a high degree of uncontrolled violence.

“These attacks display a high level of innate cruelty and an almost unprecedented degree of disregard for the welfare of one’s own family‚ one’s parents and siblings‚” he said.

“I say this with some regret: Although you are relatively young and with no previous convictions‚ your conduct warrants the severest possible penalties. Society expects no less.”

On Tuesday‚ Desai asked Botha to present any information he had which would allow the judge to show the murderer some mercy.

The advocate said Van Breda's youth and the fact that he was a first-time offender were the only factors he could suggest‚ conceding that neither was weighty enough to argue for a lighter sentence than the mandatory minimum of life.

Arguing why a lighter sentence was unjustified‚ prosecutor Susan Galloway focused on the gruesome and violent nature of the multiple murders and said they had cost the lives of three people who had "very bright futures ahead of them".

The state pulled no punches in its assertion that Henri van Breda‚ convicted of hacking his parents and brother to death and attempting to murder his ...
News
3 years ago

How jail time is determined in South Africa

It is not only the severity of an offence that is taken into account during sentencing. Judges remember that criminals are human beings too‚ so their ...
Ideas
3 years ago

Why did Henri van Breda hack his parents and brother to death with an axe and leave his sister bleeding for hours on the morning of January 27‚ 2015? ...
Ideas
4 years ago