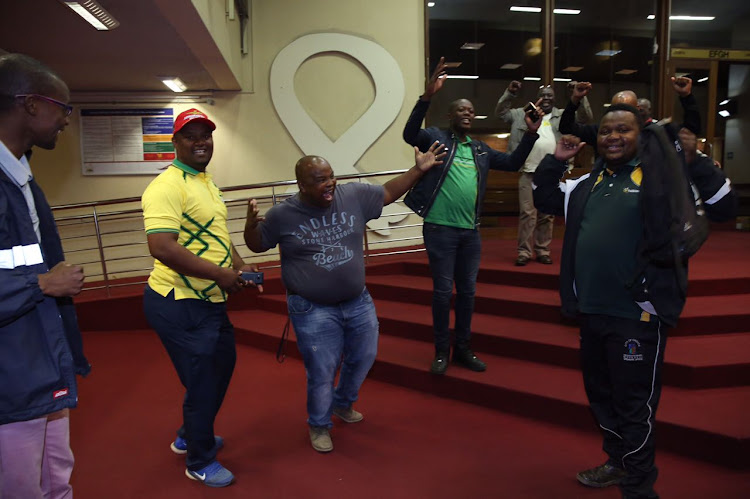 ANC members celebrate after the Pietermaritzburg High Court on Friday granted an interdict to to stop the party's provincial elective conference this weekend.
Image: Jackie Clausen

The ANC has been told that it may not hold its controversy-riddled KwaZulu-Natal elective conference, scheduled to take place this weekend.

An eleventh hour court application to stop the conference was granted in the Pietermartizburg High court on Friday.

Disgruntled ANC members - who claim to represent 44 branches out of 88 in the troubled Moses Mabhida region – rushed to court on Friday afternoon to apply for an urgent interdict to stop the three-day conference from going ahead.

By Friday afternoon, hundreds of delegates had already started streaming into the University of Zululand in Empangeni after the ANC National Executive Committee announced at the end of May that it “had gone beyond the minimum requirements” prescribed in its constitution for the conference to proceed.

Absent, however, from Zululand, was ANC Provincial Task Team co-ordinator Sihle Zikala - who has been tipped to be elected chairman of the ANC in KZN at the conference - who was instead at the high court. He was accompanied by eThekwini mayor, Zandile Gumede.

Several ANC branches objected to the announcement of the dates for the conference, including the Moses Mabhida region members who launched the legal application.

The application was defended by the ANC and members of the Provincial Task Team, who were cited as respondents.

After standing down the matter for a short while, Judge Jacqueline Henriques granted the interdict to stop the party from proceeding with the conference, saying that if the elective process was tainted, the court should err on the side of caution.

During oral arguments, Advocate Cameron Hunt SC, for the six applicants, said that if the conference went ahead without remedy it would be in breach of the ANC’s own constitution.

In papers before the court, he pointed out that the conference did not have the required number of voting delegates to proceed.

“It is unlawful for the conference with a sub-minimum number of voting delegates. That is, of course, ignoring the fact that, on evidence, some of the delegates at the conference were elected at BGM’s [branch general meetings] which were not properly convened,” he said.

He argued that the ANC still had seven weeks to hold a properly constituted elective conference.

“Instead, the respondents are forging ahead doing damage to the entire organisation. Do they want a third rerun of this conference?” he said.

Hunt added that if their application was unsuccessful, the party in the province would be run by people imposed on ANC members, rather than people elected to do so.

Advocate Vinay Gajoo, for the ANC and other respondents, argued that they had less than half an hour to read papers served on them for the application.

He alleged that the applicants had known of the dates of the conference since May 29, and that their application amounted to an ambush.

“It has simply been impossible to consult with our clients on these papers and all of the submissions that have been placed before this court,” he said.

Moses Mabhida, which has been identified as problematic by the ANC, alongside the Harry Gwala, eThekwini and Lower South Coast regions, has been deeply divided between pro-Cyril Ramaphosa members and those who supported former president Jacob Zuma ahead of the party’s national elective conference in Johannesburg in December.

The Moses Mabhida region, which is made up of Pietermaritzburg and surrounding areas, is the third largest in the province after eThekwini and Musa Dladla in Richards Bay.

The weekend’s conference is a rerun of the disputed elective conference held in November 2015‚ which was declared null and void by the Pietermaritzburg High Court after its outcome was challenged by the so-called ANC rebels.

Zikalala said outside court that he "noted" the judgement.

"We are going to proceed to Empangeni and engage with the PTT on the judgement. We will then see what we do going forward in terms of submitting documents and ensuring we engage on all issues. We don't think that think that those issues that were raised are difficult to handle, but they need us to ensure that we respond. The reality is that we were not given time to respond," he said.

Disgruntled ANC members - who claim to represent 44 branches out of 88 in the troubled Moses Mabhida region – are rushing to court on Friday ...
Politics
4 years ago

On the day that former president Jacob Zuma heads back to court for graft and racketeering charges‚ the ANC in KZN is set to finally hold its ...
Politics
4 years ago

Decisive action to be taken to stop political killings in KZN: Ramaphosa