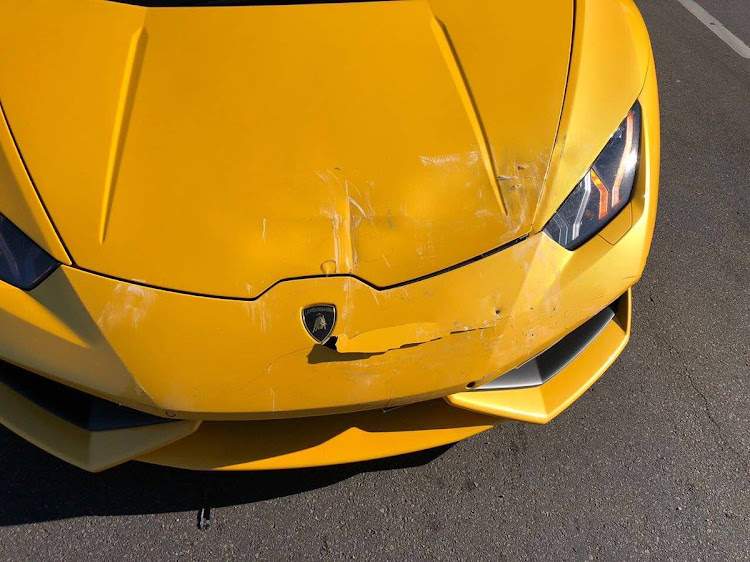 A Lamborghini‚ McLaren‚ BMW M3 and Johannesburg Metro Police (JMPD) vehicle were involved in two collisions at the weekend.

The two yellow supercars were damaged on Sunday morning while travelling with a JMPD escort along Grayston Drive in Johannesburg.

“The JMPD were escorting sports cars from McLaren Sandton to Melrose Arch for an exhibition‚” explained JMPD spokesman Wayne Minnaar.

He said the collision between the two supercars happened at the Grayston Bridge.

“The circumstances around the incident are not yet known and are the subject of a police investigation‚” he said.

He said that a JMPD vehicle collided with the BMW in the same convoy. “We are not sure if the BMW was part of the cars that were going for the exhibition.”

Nobody was injured in the fender benders and it was not immediately clear how much the final repair bill would be.

An employee at McLaren Sandton described the damage to the supercars as “minor”.

The supercars were identified by Car Magazine  as a Lamborghini Huracán and a McLaren 720S.

Man killed in freak accident after stopping to help hitchhikers

A man who stopped to pick up hitchhikers on the R541 near Badplaas died in a freak accident at the weekend‚ said the Mpumalanga community safety ...
News
4 years ago

Two people were killed in a head-on collision between two vehicles on the R501 in Carletonville‚ west of Johannesburg‚ during the early hours of ...
News
4 years ago

WATCH | Biker clings to back of bakkie after wheelie goes wrong

A bakkie driver ended up with an unusual passenger after a motorcyclists wheelie went horribly wrong.
News
4 years ago