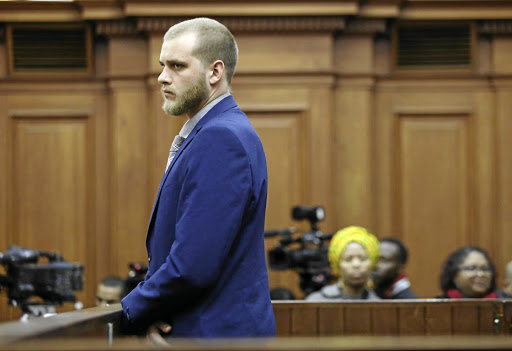 Henri van Breda was found guilty of the murder of his parents and brother, and the attempted murder of his sister.
Image: Esa Alexander

Marli van Breda‚ whose brother Henri received three life sentences for an attempt on her life and the brutal murder of their parents and brother, will have to wait to hear if her curatorship under advocate Louise Buikman will continue.

This is despite the fact that she is an adult. Marli was 16 years old when the attacks happened and turns 20 this year.

A report was scheduled to be heard in chambers in the High Court in Cape Town on Monday‚ but was postponed to July 31.

State prosecutor Susan Galloway‚ summarising the hardships faced by Marli in court last week ahead of the sentencing‚ said that media attention was only "one small part" of the hardships the survivor had faced.

"She was a vulnerable school girl who now has to grow up alone‚ knowing that her brother killed her parents and sibling. She has lost her family‚ home‚ and everything else‚ and nothing will ever be the same again for her‚" said Galloway.

Marli was the only survivor of the gruesome axe killing at 12 Goske Street at the De Zalze estate on January 27 2015. Within minutes of the news spreading across the world‚ her privacy became a subject of major concern to those in the extended family.

Galloway said in court earlier that Marli's brother had left her to suffer for three hours before calling for help on that gruesome morning and said the fact that she did survive was not due to "mercy but a miracle".

She lived – but not to tell the tale as the brutal attack left her with retrograde amnesia. Marli‚ in a further bid to protect her privacy‚ had declined to give a victim impact statement to Galloway ahead of her brother being sentenced last week.

Buikman was appointed as Marli's curator by the court three years ago after the murders‚ and this was extended in October 2016‚ even though by then she had turned 18.

Until the postponement date‚ the existing terms still apply and stipulate that Buikman is the only person with whom the media can liaise with when it comes to Marli. It was also stated that the media shall "exercise exceptional care and consideration when reporting about Marli".

Van Breda the bizarre: The many faces of a family axe killer

Throughout his trial, conviction and sentencing, he went from confident to cocky to crestfallen to consumed by denial
News
3 years ago

You've got Van Breda‚ now use the same skills to catch other criminals: parliament

The chairperson of parliament’s portfolio committee on police‚ Francois Beukman‚ congratulated the police on the three life sentences handed down to ...
Politics
3 years ago

Henri van Breda is a cold-blooded‚ savage and cruel killer who must spend the rest of his life behind bars‚ Judge Siraj Desai said on Thursday.
News
3 years ago