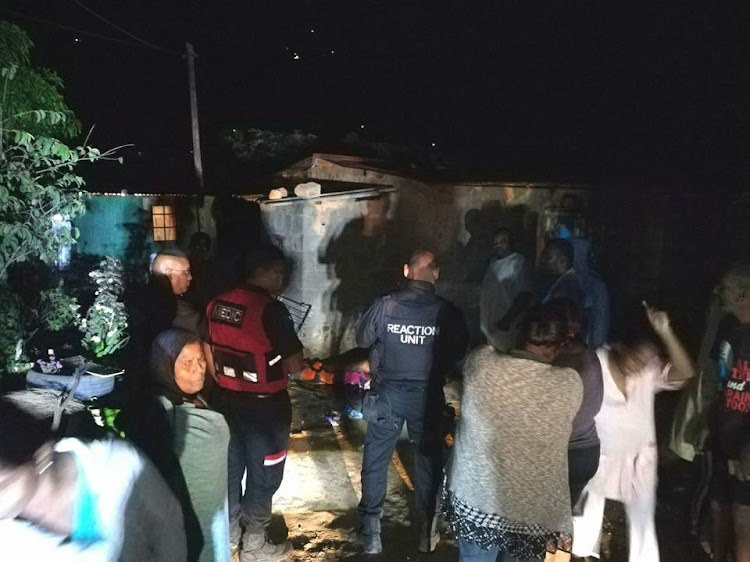 Security guards form a barrier between angry Verulam residents and a man accused of raping his 10-year-old stepdaughter at his home on June 11 2018
Image: RUSA

A man accused of raping and prostituting his 10-year-old stepdaughter was rearrested by a private security company in Verulam‚ north of Durban‚ on Tuesday afternoon.

This after the 44-year-old man escaped from the Osindisweni state hospital on Monday night.

The man‚ who was badly beaten by a mob‚ is understood to have been taken to hospital by his boss.

Reaction Unit South Africa spokesman Prem Balram previously told TimesLIVE that a neighbour found used condoms in the suspect's home. “She questioned the child who admitted that she was being raped by her stepfather since her mother's death five years ago‚” he alleged.

Balram said that the child had explained that she had been held captive in the house - since they had moved from Gauteng in November 2017. She claimed her stepfather had sealed the doors and windows and prevented her from going to school. She has also alleged that her stepfather had forced her to sleep with other men to subsidise his income as a mechanic.

KwaZulu-Natal police are searching for a Verulam man accused of raping his 10-year-old stepdaughter who escaped from police custody at a local ...
News
3 years ago

Balram said his officers had re-arrested the man at a cement factory.

“Officers were dispatched to a business after staff recognised the suspect from a post on Facebook page. They found the alleged rapist was severely assaulted [again] by an angry mob. He was placed under arrest and is currently detained‚” he said.

“Police informed RUSA that the suspect could not be located after he escaped from hospital. He had been hospitalised for the injuries that he sustained during the assault.”

Police spokesperson Colonel Thembeka Mbhele said that the man would appear in the Verulam Magistrate’s court on Wednesday.

She said that the 10-year-old girl was being kept in a place of safety.

Five Free State schoolboys have appeared in court for raping their 13-year-old classmate.
News
3 years ago

Just hours before a teenager was allegedly accidentally shot dead by his father at a school in Ennerdale‚ Johannesburg‚ a 17-year-old learner from ...
News
3 years ago

Gauteng’s department of community safety says it is making progress in the fight against gender-based violence in the province.
News
3 years ago