The Jason Rohde murder trial was abruptly adjourned on Tuesday after his counsel complained it had been “contaminated”.

This was after Judge Gayaat Salie-Hlophe dismissed a report by defence witness Dr Larissa Panieri-Peter‚ a specialist forensic psychiatrist.

Salie-Hlophe ruled that there was no need for Panieri-Peter to be cross-examined by the state as her report relied on information from anonymous sources.

On Monday‚ Panieri-Peter handed in a 43-page report based on a psychiatric assessment she conducted on Rohde in 2016 as well as a “psychological autopsy” on his wife‚ Susan.

But on Tuesday‚ Salie-Hlophe said the court was not going to attach any weight to the report. Rohde’s counsel‚ Graham van der Spuy‚ brought a “special entry application” objecting to the court’s decision.

“The court has ruled that this witness cannot be examined‚” said Van der Spuy. “The court has acted grossly irregularly with this ruling … the trial has been contaminated as a result.”

He asked for an adjournment to draft the application. But prosecutor Louis van Niekerk said the court had acted within the law “up to now. [This ruling] does not call for such an entry.” Salie-Hlophe noted the objection. The next witness was scheduled for next Tuesday.

Rohde‚ the former chief executive of Lew Geffen/Sotheby’s International Realty‚ is accused of killing Susan at the Spier wine estate outside Stellenbosch in July 2016. She was found dead with the cord of a hair iron around her neck behind the locked bathroom door of the couple's room.

The businessman is also charged with obstructing the administration of justice by making Susan’s death look like a suicide. He has pleaded not guilty to both charges.

Rohde was referred to Panieri-Peter in September 2016 for an independent psychiatric evaluation. In her report‚ Panieri-Peter said it appeared there had been “a significant change in [Susan’s] appearance and behaviour prior to her death".

“She was a non-smoker‚ and‚ in fact‚ was against smoking for most of her life. Friends expressed shock that she had started to smoke in the months before her death‚” she said.

“There is a photograph of her on the day before her death posing with a cigarette; and this was considered to be most out of character. She drank alcohol on social occasions. Despite a strict upbringing regarding alcohol‚ in the months before her death she drank more.” 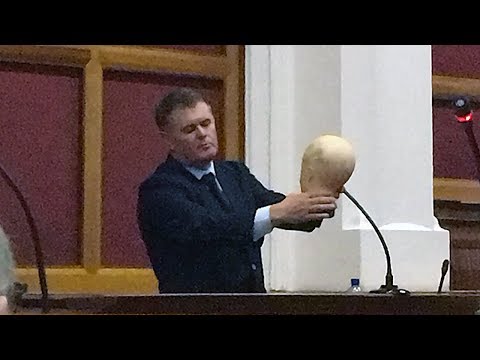 Earlier in the trial the court heard testimony about Rohde’s extramarital affair with Cape Town estate agent Jolene Alterskye‚ a colleague. WhatsApp messages submitted to court in November told a story of Rohde’s sizzling love for the mistress and hatred for his wife.

The psychiatrist said she also interviewed the couple’s marriage counsellor‚ who was “very concerned about [Susan’s] mental health and recommended admission to hospital”.

The report said: “The community around Mrs Rohde was first confronted by the news of suicide. Soon thereafter‚ various rumours began in the community and then Mr Rohde was arrested. A deluge of media speculation and sensationalism followed. Family and the community then faced the possibility of homicide.

“Comparisons were made at the time with comments such as‚ ‘another death in a bathroom’. The ‘story’ has elements of scandal‚ secrets‚ lies and death.”

Panieri-Peter concluded that Susan had “insecurities and was a perfectionist”‚ adding: “I would say she had major depression … and that alone increased the risk of suicide very significantly.”

“The post-mortem examination conducted on the body of the deceased shows the cause of death as consistent with asphyxia following manual strangulation and external airway obstruction‚” says the indictment. “The features of the ligature imprint abrasion mark are consistent with post-mortem application to the neck.”