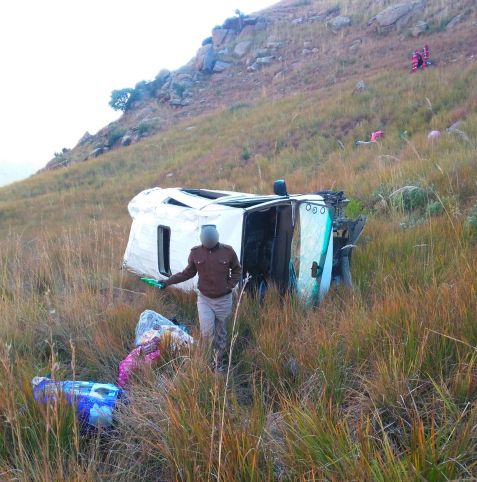 Two passengers were killed when a taxi rolled down a mountain on the R712 in the Golden Gate Reserve, Free State on June 13, 2018.
Image: ER24

Two people were killed and six others injured early on Wednesday when a taxi rolled down a mountain on the R712 in the Golden Gate Reserve‚ between QwaQwa and Clarens‚ in the Free State.

Paramedics arrived on the scene to find the taxi lying on its side some distance down the side of a mountain.

“Paramedics assessed the patients and found that two had sustained numerous injuries and showed no signs of life. Unfortunately‚ nothing could be done for them and they were declared dead by Provincial Services.”

Six other patients were sustained moderate to serious injuries.

“The patients were treated for their injuries and were thereafter transported to nearby hospitals for further treatment‚” said Meiring.

Is it a vehicle or a washing machine? Cops make bizarre find on Joburg taxi

Some Gauteng taxi drivers have found a way around having a licence disc – they are making their own.
News
4 years ago

Man killed in freak accident after stopping to help hitchhikers

A man who stopped to pick up hitchhikers on the R541 near Badplaas died in a freak accident at the weekend‚ said the Mpumalanga community safety ...
News
4 years ago

One person died in a fiery airplane crash in Port Elizabeth on Monday afternoon.
News
4 years ago