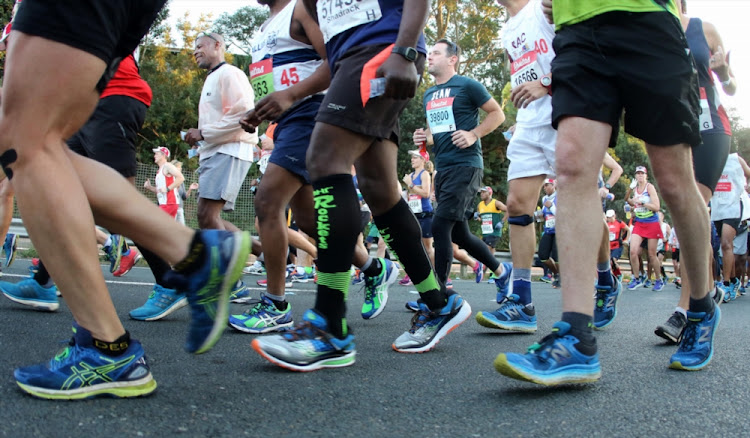 Runners near the finishing line of the Comrades Marathon.
Image: Anesh Debiky/Gallo Images

A volunteer setting up a water stand for the Comrades ultra-marathon is in the intensive care unit at St Anne’s Hospital in Pietermaritzburg with multiple injuries after being run over by a bakkie on Sunday June 10.

Johan Doubell‚ 51‚ a production manager for a chemical company‚ from Cleland in Pietermaritzburg‚ had a knee replacement a year ago on his right leg‚ and that knee is now broken in five places‚ said his fiancée Erika Kapp. "His left leg is fully broken... My fiancée also has broken ribs‚ a cracked skull‚ his cheek is broken and his lung collapsed."

Kapp is endorsing a fundraising campaign to help to pay his medical costs‚ which was launched on crowdfunding platform‚ BackaBuddy‚ by community organisation Porky’s People. They have a target of R100‚000. The campaign went live on June 12 and has so far raised R8‚645 with contributions from 19 donors.

Doubell and Kapp were setting up their water stand at the bottom of Polly Shorts at Ashburton‚ at around 4am on Sunday‚ she said‚ when a motorist drove into the stand‚ injuring Doubell and two other people‚ who fortunately sustained lesser injuries.

“A light blue bakkie came speeding up and hit two women before it swerved into him. It ran over him‚ reversed and then sped off‚” Kapp said.

The driver has since voluntarily handed himself over to the Pietermaritzburg SAPS Accident Unit.

The campaign on BackaBuddy can be viewed here.

South Africa completed a clean sweep at the Comrades Marathon on Sunday as Bong’musa Mthembu and Ann Ashworth ensured that the coveted titles ...
Sport
3 years ago

A Lamborghini‚ McLaren‚ BMW M3 and Johannesburg Metro Police (JMPD) vehicle were involved in two collisions at the weekend.
News
3 years ago

Two people were killed and six others injured early on Wednesday when a taxi rolled down a mountain on the R712 in the Golden Gate Reserve‚ between ...
News
3 years ago