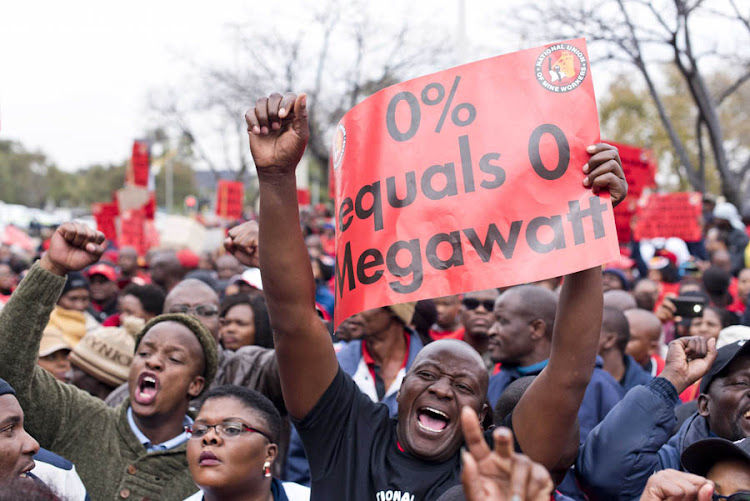 Demonstrators protest outside Megawatt Park, Sunninghill, June 14, 2018. Eskom workers are demanding a 15% salary increase while Eskom has decided to cut completely any increases for this year, saying they simply do not have the funds.
Image: Greg Roxburgh

Labour unions are returning to work on Friday after their unprotected strike on Thursday‚ but warned that they could kick into “second gear” if wage negotiations with Eskom remain deadlocked.

“Unfortunately that could include a complete national shutdown‚” National Union of Metalworkers of South Africa (Numsa) president Andrew Chirwa said on Thursday.

He said he hoped the power utility “comes to its senses” and returned to the negotiating table within a week.

“The board has already responded positively to meet urgently‚ so there should be meetings rolling in the next day or so.”

Trade unions Numsa‚ the National Union of Mineworkers (Num) and Solidarity are protesting against a wage freeze.

The National Union of Metal Workers of South Africa (Numsa) have rubbished claims that the average employee at Eskom earns R789‚000 per year.
Politics
4 years ago

The Labour Court granted Eskom an interdict on Thursday against striking unions‚ a day after protests at the power utility led to load shedding across the country.

The court interdicted Num‚ Numsa and Solidarity from any further planned strikes‚ pickets‚ gatherings or marches. Striking workers also may not:

Labour unions have until August 2 to respond.

Wage negotiations deadlocked last week‚ leading to Numsa and Num declaring disputes. The unions are demanding wage hikes of between 9% and 15%‚ but Eskom has offered 0% citing financial constraints.

Eskom had commenced with stage one load-shedding on Thursday evening due to the current industrial action‚ in which some incidents of sabotage have been reported. The load-shedding lasted just more than two hours.

Eskom workers must not be punished because of looters: Cosatu

Law enforcement agencies should expedite the process of bringing to book all the culprits who are responsible for looting and mismanaging Eskom‚ says ...
News
4 years ago

Eskom spokesperson Khulu Phasiwe said they were not aware of what the labour unions’ next step would be‚ but their security measures would remain in place.

“We have absolutely no option. We have to do that. That is what the law requires.”

“Sometimes they fear for their safety and security. It will be dangerous for them to go to work‚ which is why in some cases you will only have a skeleton staff at the power stations.”

Hadebe received a cold reception when he came out to receive a memorandum of demands from trade union members‚ demonstrating against management’s announcement they would not receive a salary increase this year.

Workers hurled insults‚ some booed while others showed him the middle finger.

After Hadebe signed the memorandum‚ he attempted to address the crowd at Eskom’s HQ‚ but his words were drowned out by boos. He then left the stage.