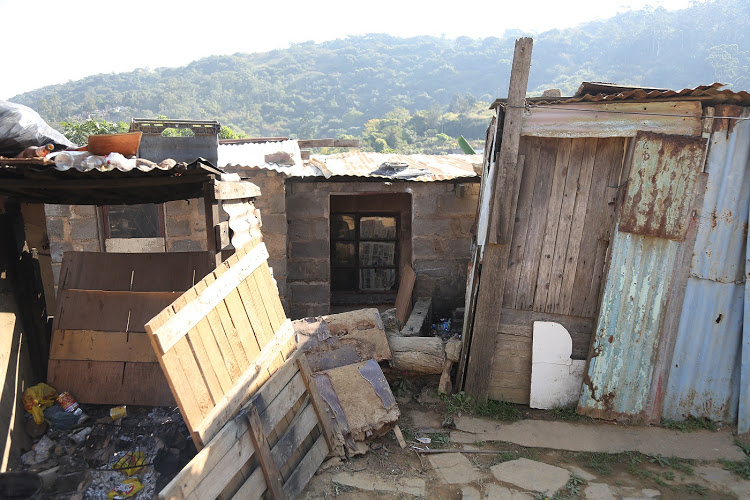 The 10-year-old girl was rescued and taken to a place of safety.
Image: THULI DLAMINI

The man‚ who cannot be named in order to protect the identity of the child‚ appeared in the Verulam Magistrate’s Court‚ north of Durban‚ on Thursday. He faces charges of rape‚ sexual assault‚ sexual grooming of a child and exposing a child to pornography. He was arrested by members of the security company at a cement factory on Tuesday and then handed over to police.

On Thursday night‚ hours after the man appeared in court‚ a video began to circulate showing him being beaten while handcuffed.

The footage shows men clad in black kicking the man’s genitals repeatedly‚ as well as striking at his groin with a broom handle. At one point‚ the man appears to be shocked with a Taser.

Security company spokesman Prem Balram said he had viewed the footage and would engage the services of a forensic expert to determine its authenticity.

“I can confirm that the suspect has been arrested twice by members of Reaction Unit South Africa and handed over to the South African Police.”

Pink lace panties lay draped over a child’s colouring book stands as a jarring juxtaposition in a dank room where a 10-year-old girl lived with her ...
News
3 years ago

A man accused of raping and prostituting his 10-year-old stepdaughter was rearrested by a private security company in Verulam‚ north of Durban‚ on ...
News
3 years ago

He said the company would “fully co-operate with any investigation into this matter".

"No faces are visible on the video and if any one of our members can be identified‚ management will take the necessary disciplinary measures against them. I will request that the authenticity of this footage be verified without delay so that I can act accordingly‚” he added.

The man‚ visibly injured‚ is in custody while police determine the extent of his wounds. He is due to appear before Magistrate Irfaan Khalil on June 25.